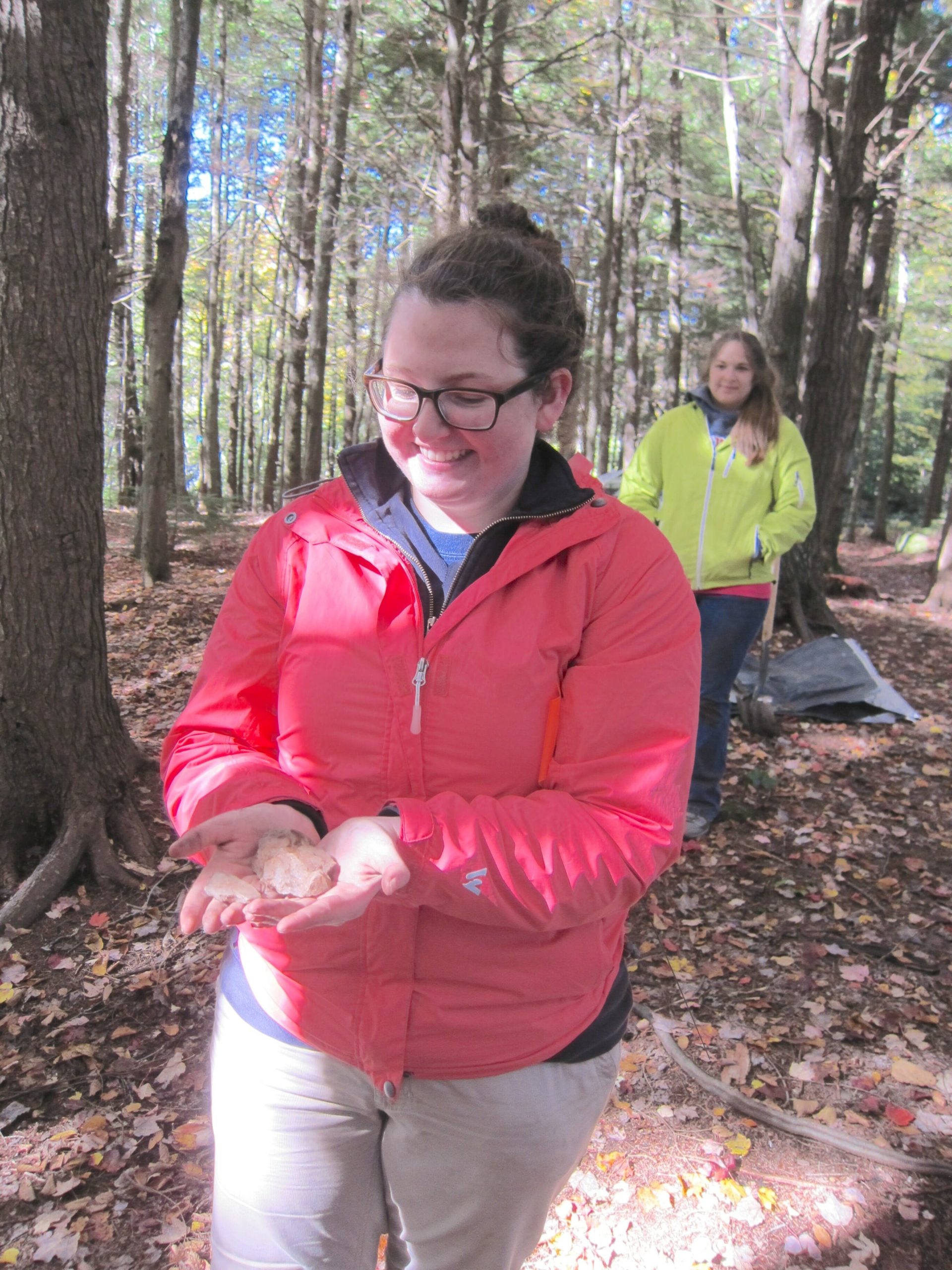 The morning of October 10, 2015, was brisk, the leaves were brilliant yellows, oranges, and reds, and the wind on the lake was creating waves a foot high. Despite the weather, I was at the lakeshore with fellow anthropology students from Franklin Pierce University and our professor, Dr. Robert Goodby, loading a motorboat with shovels, buckets, tarps, and screens. We were embarking upon an archaeological excavation on Heron Island.

When I was 13, I had gone out onto the lake with my uncle to kayak around the island and explore. While pulling the boats up on land, I glanced down into the water and noticed an odd-shaped rock. It was long and narrow, almost finger-like, but with a groove in one side. I picked it up and took it home with me and then promptly forgot about it until I was a freshman in college and taking Dr. Goodby’s Introduction to Archaeology class. I realized then that the odd rock I had found years ago might actually be a stone artifact used by Native Americans. Dr. Goodby confirmed my thoughts: it is a ground stone gouge, used for woodworking.

After working in the Southwest for the United Forest Service Cultural Resource Management Division and working for independent archaeological consulting firms in New England, I found my passion and future educational pursuit—archeology. So, when I had to choose a Senior Independent Study at Franklin Pierce, I decided to conduct a survey of possible archaeological resources in Grantham, specifically Heron Island.

With approval from Eastman’s Board of Directors, I worked with Leslie Moses, Chief Community Living Officer, to get transportation to and from the island and get the word out to the community about what I would be doing. At Franklin Pierce, I recruited fellow anthropology seniors to assist with the excavation.

The day of “the dig,” we needed a couple trips to transport all our equipment and people to the island. We then set to work and, over the course of the day, excavated nine shovel test pits, each a 50-by-50-centimeter-square hole, around various parts of Heron Island.

By 1:30 p.m. we had dug five test pits, finding nothing at all, and I was beginning to worry that all of my planning would result in empty holes. But the sixth pit yielded three artifacts: a quartz biface tool and two flakes. A biface is a stone tool that has been modified on both sides in order to create a sharp edge, and flakes are the smaller pieces of stone that are broken off during tool production.

To the layperson, three pieces of rock may not seem very important or interesting; however, the pieces have actually raised new questions about Native American activity in the Grantham area, and, specifically, how people were using the land in what is now Eastman. The biface found is not diagnostic, meaning there is no way to tell how old it is, and the flakes tell us that people were producing or maintaining tools on the island. Native Americans had clearly been on this land but seem not to have ever settled on the sites we excavated.

So how could we explain the presence of the several artifacts we found? My initial thoughts are that Heron Island was likely a waypoint for Native people, a convenient place close to water and other resources where they could rest, maintain tools, and then continue whatever they had been doing. Perhaps they were hunting and needed to sharpen a knife or make a new one, or maybe they had downed a deer and wanted to butcher it in the field to make it more portable.

These types of questions are integral to archaeological research, and I am grateful to the Eastman community for its support of my colleagues and me during this excavation and for its interest in my subsequent research and analysis.

Courtney Cummings is a resident of Eastman and a senior at Franklin Pierce University in Rindge, New Hampshire.