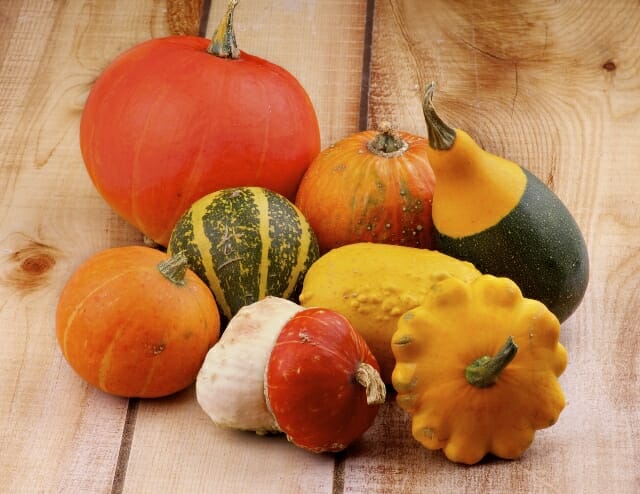 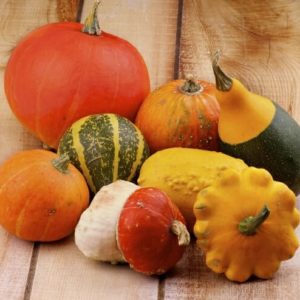 Versatile, variety, and nutritious are all adjectives that can be used for winter squash. Whether you grew your own, or buy them from local farmers and markets, consider putting some up for winter. With proper storage of squash, you’ll benefit from their fresh flavors for months—often until next spring– as well as the nutrition of these vegetables.

Although winter squash has the same calories roughly as potatoes, it has more than twice the potassium. Winter squash provides various vitamins such as A, B6 and C, fiber, and minerals that may reduce the risk of certain cancers. These squash are a good source of anti-inflammatory nutrients needed for a strong immune system, such as omega 3’s and beta-carotene.

Winter squash store well, such as in a cool room or basement, which stays around 50 to 55 degrees (F). Acorn squash can store 3 to 4 months, other winter squashes can last up to 6 months or more.

So just what are winter squash, and all the types you may find? They’re one of the two major group of squashes, the other being summer squashes like yellow and zucchini. They’re so named as they’re harvested later—early fall around the time of first frost—and last well into and through winter. They’re one of the few vegetables native to North America, and have been grown as one of the “three sisters” by native peoples along with corn and beans.

Squashes are in the cucurbit family, related to cucumbers, melons, and gourds. Among the three main winter squash species, there are at least a dozen main types you may find.

Acorn are one of the most common winter squashes, medium size with an acorn shape, ridges, and dull green rind. Acorn squashes that have turned orange will have tough and fibrous flesh inside. It has a mild flavor, good for soups, baking, and stuffing.

Buttercup is similar in size to the acorn, only more squat with smooth dark green rind with some pale streaking. Some varieties may have a small bump on top, as it is a type of “turban” squash (see below). Its distinctive circular ridge on the bottom sets it apart from the similar “kabocha” squash (see below). Cooked, its flesh is mild and somewhat dry.

Butternut is another of the more commonly seen and used winter squashes, having a distinctive elongated pear shape—long neck and bulbous base– with tan rind. The flesh has a sweet and nutty flavor, and is bright yellow-orange. Similar to the acorn, roast it, mash it, or make into soup. It’s easier to deal with cutting the neck from the base, and handling each separately. To remove the hard rind, use a vegetable peeler once it is roasted.

Carnival squash is a cross between Sweet Dumpling (see below) and acorn squashes, and is similar in size and shape. It is light in color, white and yellow, with ridges. Use it similar to acorn or butternut squash.

Delicata is often called a “sweet potato squash” as it has a similar consistency when cooked, and similarly is sweet but more “earthy”. It is small, oblong, and pale yellow with green stripes. The thin skin makes it easily bruised, but also makes it edible. Use as you would a sweet potato, or simply cut in half, scoop out the seeds, and roast with olive oil and salt.

Hubbard is one of the larger squashes, noted for its size, teardrop shape, blue-gray rind and bumpy surface. It is good roasted, and sometimes is used as a vegetarian turkey substitute at Thanksgiving. The flesh has a pumpkin flavor.

Kabocha is a Japanese type of winter squash (this being the generic name for squash in Japanese), similar to the buttercup in appearance and coming in green or red. The deep yellow flesh is flaky but sweet, good roasted or baked with plenty of butter or oil.

Pumpkins are well-known, and come in sizes from tiny decorative ones to the giant ones you see at fairs and competitions. Keep in mind the ones for carving generally lack flavor, while the Sugar Pie ones have the sweet, pumpkin flavor good in pies, soups, or roasted. The squat and colorful French heirlooms are both sweet and ornamental.

Red Kuri is another Japanese squash, similar to a small Hubbard only with a red-orange rind and so is sometimes called a red Hubbard. The yellow flesh has a flavor resembling chestnuts, and is good roasted or the squash split and stuffed.

Spaghetti squash is light yellow, large, and oblong. Once the flesh is cooked, run a fork through it to make long “strings” that resemble spaghetti. In fact it makes a healthy alternative to pasta, with a mild flavor. This, as well as the Acorn and Delicata are very closely related to the summer squashes, just different varieties of the same species.

Sweet Dumpling is one of the parents of Carnival squash, being compact, whitish-yellow with some green streaks, and pronounced ridges. Its taste resembles a sweet potato, and its flesh is edible. This could be used in place of sweet potato or pumpkin in recipes.

Turban is the larger group of which Buttercup is a member, noted for its pronounced “bump” on top resembling a turban or turk’s cap—another name for it. Often these are quite colorful and can be used simply for decoration. Its sweet and mild flesh is good roasted, or in soup, and its outer rind can be used as the soup tureen.

There are many more types and cultivars of winter squash, including heirlooms. Experiment with some in this winter’s cooking, and try growing some from seeds next year.

11/1/14 Distribution of this release is made possible by University of Vermont Extension and New England Grows–a conference providing education for industry professionals and support for Extension’s outreach efforts in horticulture.