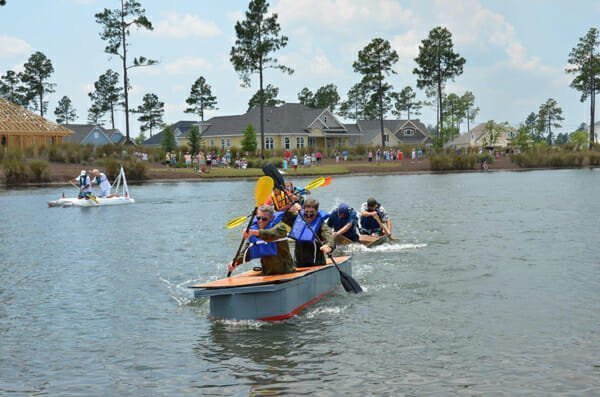 When the Ice Is Nice at Eastman

Occasionally, though, the surface can be clear and smooth. That’s when I’ll rig up my iceboat for some cold, fast sailing. How cold? Damned cold. How fast? Well, this iceboat can travel at up to four times the speed of the wind.

Because the lake is small, however, I try to keep the speed down and the hiking to a minimum. Hiking occurs when one of the three runners lifts off the ice as the boat heels from a gust of wind. Holding that position as the boat skims over the ice takes finesse and is one of the many thrills of the sport. As for the cold, what’s especially convenient about sailing at Eastman is that I can always stop my boat on the ice behind my house and duck in for a cup of hot chocolate. Stopping is a matter of coasting into the wind since there’s no brake.

It’s not often that conditions are just right on our little lake. Even when the ice is nice, the wind can either be too strong or too light. When the ice is hard and smooth, it takes only a very slight breeze to accelerate the boat, but if the air is still or the ice is covered with more than an inch of snow, one must wait for another day.

Once, sailing on Long Island’s Lake Ronkonkoma with a fresh wind and nice ice, I must have been zipping along at fifty miles an hour or more. In the euphoria of the speed, I hardened in the sail tighter and tighter and I dared to go faster and faster even as my mast bent to a dangerous extreme. BANG! The mast exploded in a shower of Sitka spruce splinters, and I coasted to a stop, dragging my broken mast along behind. I’ve had many memorable iceboating experiences, but that may have been both the best and worst of them. Most iceboaters of my vintage have stories to tell about going through the ice, but I’ve been fortunate to have none so far and hope to keep it that way.

I built my boat in 1963 from plans that were modeled after ones published by the Detroit News in 1937, hence the “DN” on the sail. The idea back then was to make the boats inexpensive and easy to build. Thousands have been built over the years and raced internationally under strict rules that limit modifications to the design. My racing days are long past, and now I simply enjoy the pleasure of sailing without competing.

I’ve sailed on lakes all over New York and in Ohio, New Jersey and Connecticut, but only on Lake Sunapee and Eastman Lake in New Hampshire. Lake Sunapee offers very nice iceboating off the State Park Beach, but no house to duck into for hot chocolate. When the conditions are good, there’s usually a group of sailors there. Where there’s a group of iceboaters, there’s usually a race or two.

If I were ever to build another iceboat, it would look something like my concept rendering here. It would have a closed canopy to shield from the cold wind and small chips of ice that fly off the front steering runner. It would also have a flotation device to keep me afloat and dry if I ever do go through the ice. In the meantime, when the ice is nice on Eastman Lake, you may see me racing the wind on my basic DN.

Craig McArt is a retired industrial designer and professor who is a regular contributor to Eastman Living.