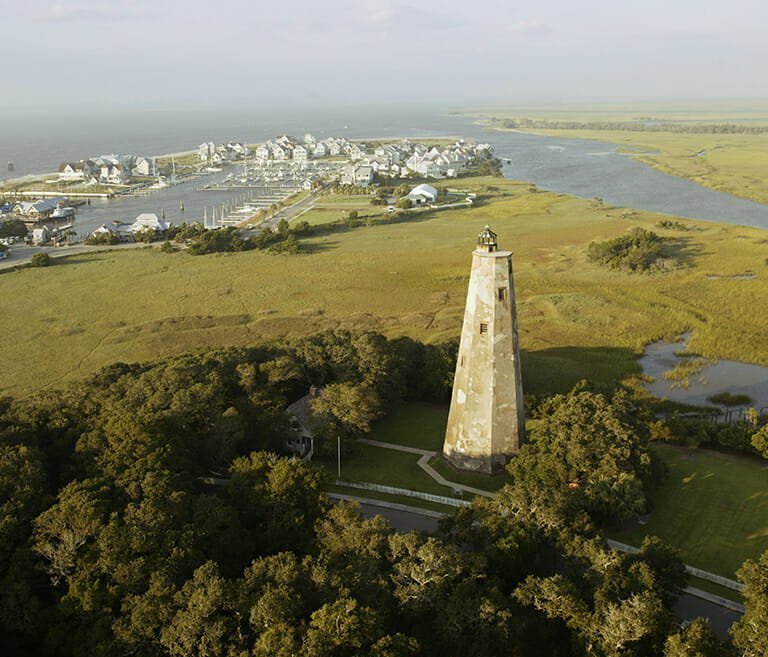 By JG Walker. Previously published in the 2015 Summer Issue. 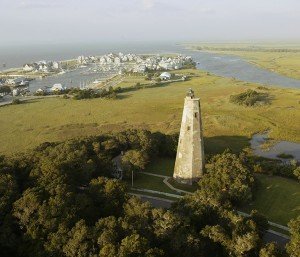 Most of the developed islands along the American Atlantic coastline have bridges that connect them with the mainland. So that we and a few hundred (or thousand) of our new anonymous neighbors can “get away from it all” by driving straight to paradise—and immediately recreating the same giant 24-hour parking lot of a neighborhood that we just got away from.

But imagine that seaside destination without the cars. At first, the motor-free quiet can be almost 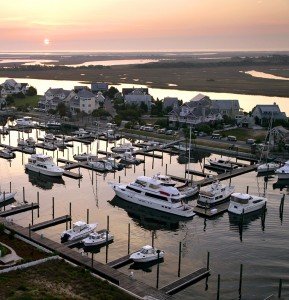 unnerving. Then you hear the sound of the breeze rustling through the oaks, the chatter of birdsong and the laughter of kids playing on a deck three doors down. And the air smells both sweet and salty, absent the acidic tang of exhaust fumes. And when you let that breathe out, you might experience an unusual spiritual sensation that could also be medically classified as “relaxation.” 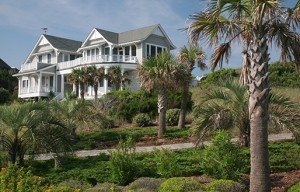 That feeling can be found in two bridge-free offshore communities—Bald Head Island on the North Carolina coast and Haig Point on South Carolina’s Daufuskie Island. You can only get there by private boat, water taxi or passenger ferry. You get around on a golf cart, bicycle or on foot. You can’t hurry. You can exhale.
And now island residents and second-home owners are discovering that they can get unplugged without being disconnected from the rest of the world. 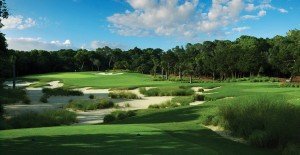 “I have great Internet [access] and great cell phone service on the island” said Kurt Haglund, “and I can look out on the beach while I work.”
Kurt and his wife Ann live in Chevy Chase, MD, where he works as a commercial real estate consultant. They bought a second home on Bald Head Island in 2010 and have two college-aged daughters and a teenage son. 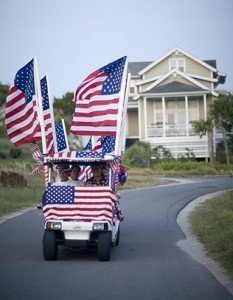 Bald Head Island enjoys the distinction of being the northernmost semi-tropical island in North America because palm trees and other tropical flora are indigenous. In fact, more than 80 percent of the island’s 12,000 total acres have been set aside as natural beaches, unspoiled wetlands and maritime forest preserves. There’s a 100-slip marina for private watercraft, but otherwise the only way to get to Bald Head is by taking the 20-minute passenger ferry ride from the town of Southport. 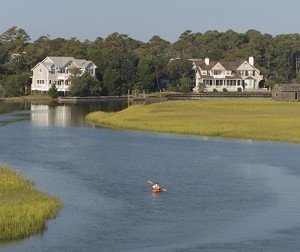 The oceanfront Shoals Club is a center of community activity, offering fine and casual dining, as well as a variety of recreational family activities. The Bald Head Island Club’s amenities include its recently refurbished seaside golf course, along with tennis, fitness and dining facilities. The island also has a full-service spa, a grocery store and a growing number of shops and boutiques, many of which have been established and are run by island home owners. 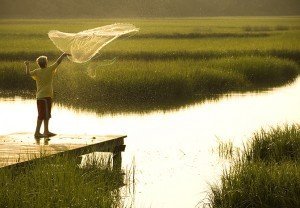 Bald Head Island’s Cape Fear Station neighborhood was recently honored as a Southern Living Inspired Community, joining a handful of elite American communities to earn the prestigious designation based on environmental sensitivity and architectural style. A unique Southern Living Inspired Home is currently under construction and can be toured as part of a celebratory weekend set for October 9-11 this year. There are currently about 1,200 residences on the island, but only about 200 people live there year-round. Most families, like the Haglunds, are second-home owners. 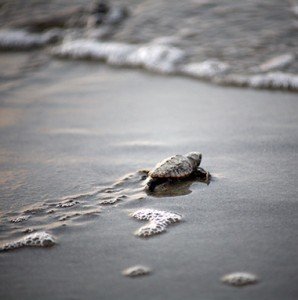 “Bald Head has really become much more than a home away from home for us,” Kurt said. “We go down to the island for at least one long weekend a month and, between May and September, at least one family member is always there. When you take that ferry ride over, you feel completely separated from the pressures of the city. It’s a simple lifestyle, but we always seem to be moving—golf, tennis, paddleboarding or just riding bikes to pick up groceries. We’re never bored, but sometimes exhausted.”
And the younger Haglunds, who stay in touch with their friends in Maryland via social media, are doing more than just having fun. “Our daughters have taken classes at UNC-Wilmington,” Kurt said, a trip that includes a bike ride to the ferry and a 40-minute drive. “And all of the kids have found summer jobs on the island.” 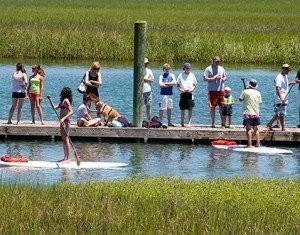 He also noted the strong sense of community on Bald Head Island and that all of his family members have established new friendships there. Making those connections is enabled by the full calendar of community events that draw the full- and part-time residents together, especially the island’s signature “Howl at the Moon” parties where families gather on the beach to welcome the full moon rising over the ocean. “We’ll go down early or stay over a few days just to make a ‘Howl,’” Kurt said. “They’re really indicative of the friendly nature of Bald Head. People are just happy there.” 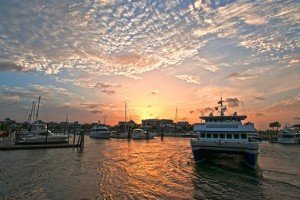 When asked if he and Ann are thinking about retiring to Bald Head someday, Kurt said, “You know, as long as I can work from the island, I’m not thinking about retirement. But I can definitely see spending more time there in the future. And we’re really looking forward to the day when our grandkids can come and visit.” 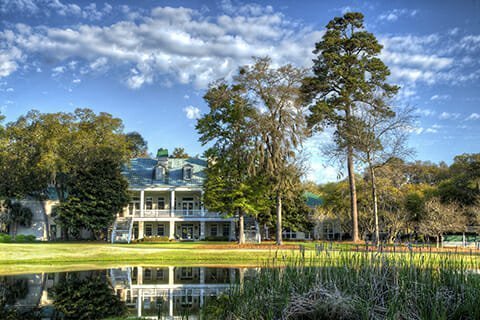 “My daughter and I have a regular weekday commute,” said Haig Point resident Barbara McCallion. “We take the five-minute water taxi ride to Harbour Town (on Hilton Head Island). From there, she rides with her Spanish teacher to school and I drive to my office on Sea Pines Circle. It usually takes us about 15 to 20 minutes.” 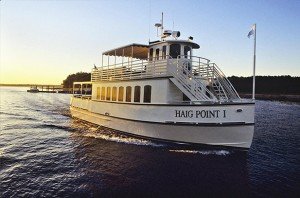 Getting to work or school in less than 20 minutes would be the envy of many American families, but the McCallions don’t live in a typical suburb. Their home is in the Haig Point community on Daufuskie Island, accessible only by private boat, the swift water taxi or a 30-minute passenger ferry ride from Hilton Head. 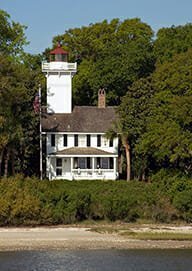 Barbara’s husband Kevin has an even shorter commute to his job with global financial services giant Dun & Bradstreet; his Haig Point home office Internet connection allows him to stay in touch with colleagues and clients around the world. And he can use his smart phone to stay up-to-the-minute on market developments while taking care of business on the golf course, too.

Haig Point’s acclaimed Rees Jones Signature Course is one of the South’s top-ranked private courses and a major attraction for avid golfers like Kevin. Its unique 20-hole design allows members and their guests to play different routings and the club’s nine-hole Osprey layout offers them a quick-round alternative when other activities are on the day’s agenda.

Those might include a match at Haig Point’s award-winning tennis center—Barbara plays on a competitive club team—or a ride along Daufuskie’s pristine beaches atop a horse stabled at the community Equestrian Center. Water sport options include everything from fresh- and saltwater fishing to sailing and kayaking. A swim, yoga class or workout session at the fitness center might precede dinner at the golf clubhouse or The Calibogue Club, where fresh local seafood is always on the menu. 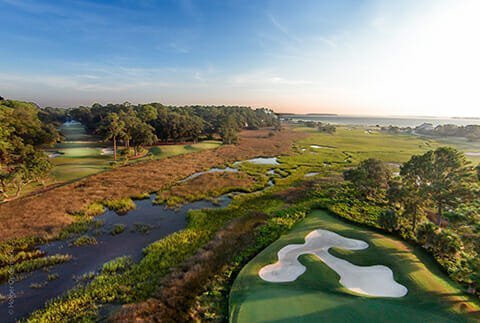 The best thing about living in an island community like Haig Point, Barbara said, “is being able to come home every night and really unwind. There’s no noise, except maybe for the birds and the cicadas. The sheer, unspoiled beauty all around really makes you feel like you’re part of the natural world.

“It’s a simpler and more secure life—we call it our ‘Mayberry lifestyle.’ It’s a very close-knit community where neighbors look out for one another and where our daughter can go out bike riding or beach walking with her friends and we don’t have to worry about her safety.”

Haig Point is one of three private developments on Daufuskie Island, which also includes an African-American community with family roots that go back more than 100 years. “One of the new things that has brought people together from all of the different island communities is our sustainable farm and orchard,” Barbara said. “It’s really great to see corporate executives working side-by-side with local residents in the garden or feeding the goats. We 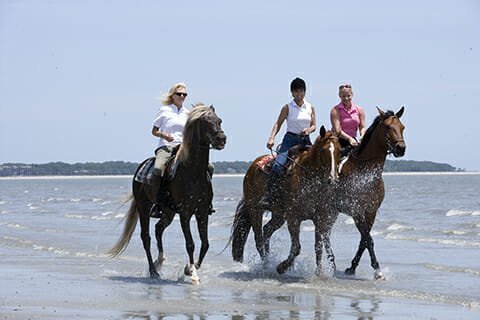 get fresh eggs, organic vegetables, local honey and goat cheese from the farm.” An artisan’s village is also being established next door where locally produced paintings, sculptures and crafts can be displayed and sold.

Although they’re full-time Haig Point residents, the McCallions stay in touch with family and friends in their home state of New Jersey and look forward to their frequent visits. “Our daughter has long-time friends from Jersey who come down for two or three weeks every summer to hang out with their new Daufuskie friends.” Barbara said. “We love sharing our home and our community with people; they’re amazed at how beautiful and natural it is here.”

Living in an island community without bridge access “may not be for everybody,” she concluded, “but it’s perfect for us.”