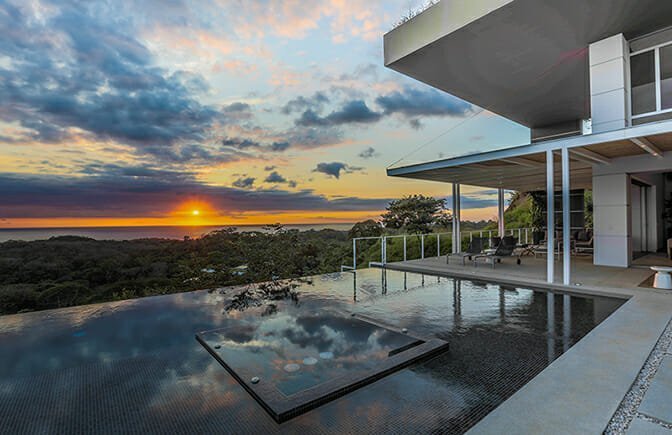 International Communities are Setting the Pace

By Sam Crawford. Previously published in the 2015 Summer issue. 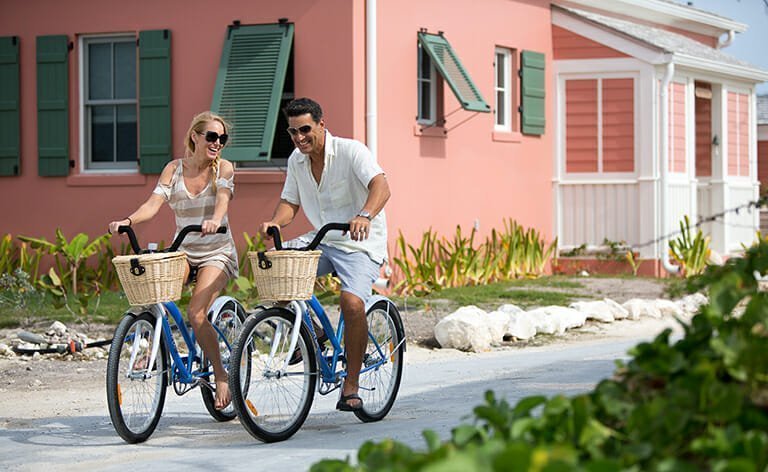 Sustainability has become a popular buzzword with American community developers. While some may see that trend as being little more than a marketing tool, the fact is that sustainable designs and building practices are a good thing—for the planet and for property owners. It’s not just hype to consider long-term environmental impacts when planning new developments; it’s a forward-looking strategy that seeks to minimize potential future conflicts—and the remedial costs associated with them—between people and nature. Likewise, for the individual buyer, owning a home in a sustainably-designed community has the dual benefit of being a more enjoyable place to live and one that’s more likely to increase in value over time.

But the sustainability ethic hasn’t just found a home in the United States. Two thriving residential communities—Schooner Bay in the Bahamas and Kalia in Costa Rica—are expanding the frontiers of environmental respect in regions where the abundance of natural beauty is itself a signature amenity. 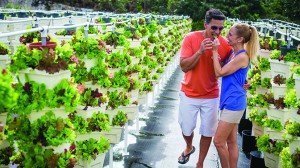 Schooner Bay on Great Abaco Island in the Bahamas is a unique Caribbean community that was designed from the beginning to the highest contemporary standards of sustainability. The residential options at Schooner Bay include oceanfront homes, harbourside cottages and maintenance-free condominiums in a village-style setting that has been created to protect the natural environment and enhance the quality of life.

A look at the Schooner Bay masterplan reveals one of the initial aspects of its sustainable design. While many modern planned communities reserve some land for open space or natural areas around the tract’s perimeter, Schooner Bay’s developers found that a large swath in the heart of the property was on the Bahama Parrot’s migratory route. So they left that area undeveloped, along with an even larger adjacent forest where the parrots feed and other native birds, animals and plants thrive. Schooner Bay’s human neighborhoods were designed around those pristine and sensitive lands. Likewise, a buffer along the community’s beachfront was left untouched to preserve the natural coastal dunes, vegetation and habitat.

Water supply and management can be an issue for any island development, so Schooner Bay’s builders decided on an innovative plan to supplement the existing underground aquifer. A massive 1.3 acre cistern was carved out of a limestone ridge that overlooks the entire Schooner Bay community. The 12-inch-deep “box” was then lined with a waterproofing barrier to collect and hold rainwater. The ridge was restored and replanted with native species, including a grove of coconut palms to provide shade and thereby decrease evaporation. A single cistern valve, the design’s only moving part, was installed to allow gravity to channel the collected rainwater 40 feet below. This simple, effective and nearly invisible system serves as an emergency backup water supply for residents, is available for use in fire prevention and can be a resource, if needed, for Schooner Bay’s landscaping. 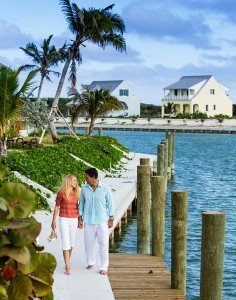 Indigenous flora has been preserved or planted throughout the community and that abundant greenery thrives with the assistance of a stormwater management system that collects and distributes the rain through natural swales and other channels. In addition, Schooner Bay’s wastewater treatment plant complies with the most stringent reuse standards for additional irrigation.

And the community’s solid waste management plan includes a combination of recycling, composting and incineration to accomplish zero-waste generation. Even the incinerated material and recycled glass is used in the making of concrete for community structures. There is no Schooner Bay landfill.

The tropical climate on Great Abaco Island sometimes needs to be cooled for human comfort and Schooner Bay’s builders also met that need in the most natural ways. In addition to thoughtful siting of the homes and other buildings to catch the ocean breezes, plus wood louvers and overhangs to provide shade, the community’s air-conditioners are cooled with a geothermal system that greatly reduces electricity consumption and noise pollution.

But Schooner Bay is much more than just a place to sit on a shady porch and watch the waves roll in. To that end, the “wellness lifestyle” is a fundamental aspect of the Schooner Bay experience: the community’s Integrated Medical Centre not only has contemporary diagnostic and treatment facilities, but also emphasizes holistic and preventative care. An organic farm produces fruits and vegetables for the kitchens of residents and restaurants alike, while the local daily-catch seafood is as fresh as fresh can be. Fitness trails meander throughout Schooner Bay for strollers, hikers and bikers, while the new Sports Complex offers tennis, pickleball, volleyball and basketball courts. Golfers enjoy access to the nearby Abaco Club course and the available water sports include world-class fishing in the crystal-clear Caribbean waters, plus swimming, surfing, paddleboarding and sailing. 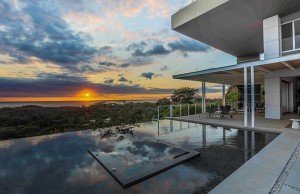 Located on the beautiful Nicoya Peninsula along the Pacific Ocean shoreline of Costa Rica, Kalia (pronounced col-YA) is comprised of four distinctive residential communities—Turquiose View, Ruby Sky, Emerald Woods and Diamond Cove—that have each been conceived and designed as sustainable “eco-villages.” And the Kalia Communities have recently announced yet another environmentally friendly opportunity for homeowners who want to reduce their carbon footprints and save money at the same time.

First, some important notes about this remarkable Central American nation: Costa Rica is often referred to as the “Switzerland of the Americas” because of its long tradition as a stable democracy with a thriving free-market economy. Crime rates are exceptionally low and Costa Rica enjoys such peaceful relations with its neighbors that it has not had an army since 1949. Instead, the country’s resources are focused on developing its infrastructure and economy, while at the same time protecting its incredible biodiversity that includes 12 distinct ecosystems. In fact, more than 25% of the land is designated as national parks, conservation zones or nature preserves. At the same time, Costa Rica has surprisingly affordable real estate, incredibly low property taxes (0.30% or less) and no applicable capital gains tax. 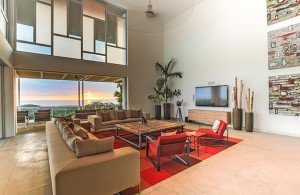 Costa Rican culture is a rich blend of Spanish and indigenous traditions, while the new generation has been quick to embrace modern amenities like high-speed Internet access. The national literacy rate exceeds 96% and English is the country’s second language, spoken by most locals who work in the hospitality and real-estate industries. Average Costa Rican life expectancy is 77 years, due in part to state-of-the-art medical facilities, as well as patient care that is both affordable and primarily delivered by physicians who graduated from American medical schools. And because of the nation’s growing popularity as a vacation destination, daily flights are available to and from the United States.

From their inception, the Kalia Communities of Costa Rica have been committed to the highest standards of sustainability and respect for the natural environment. The structural architecture of the private homes, condominium buildings and community facilities in each of the four Kalia eco-villages blend in with the unspoiled natural environment. Home and condo designs feature shaded outdoor living areas and naturally sunlit interiors. Landscaping around the residences and commercial buildings feature local plant species that require minimal, if any, additional irrigation. On the inside, furnishings that are made of recycled wood and other materials are the norm, as are low-energy-consumption appliances and eco-friendly cleaning and bathing products.

One of the most eye-catching features of many Kalia single-family homes are the green roofs planted with native grasses and other flora that reduce cooling costs and create a delightful garden space for relaxing and enjoying the views. And every Kalia home has rooftop solar panels that use the sun’s renewable energy to power its hot water heaters.

The big news at Kalia takes that standard feature one step further: the innovative Bellazo by Kalia Homes design features the KaliaSmart™ system that employs a large solar power array and a dozen energy-efficient features to produce nearly as much electricity as it uses. Current plans call for the system to be installed in more than 1,000 homes and one resident who already has KaliaSmart™ reports that the family’s monthly power bill has been about $16, even with the air conditioning on all day long. Collectively, KaliaSmart™ homeowners are projected to save over $9.2 million on their electric bills over the next ten years and a reduced carbon dioxide impact that’s the equivalent of planting more than one million trees.

Each of the four Kalia Communities is laced with greenways that protect natural habitats, while also offering paths for recreational walkers and bikers. And every one has a specially designed children’s playground, plus convenient restaurants and village markets. The beaches are pristine and the surfing is internationally renowned. The fishing, boating and sailing opportunities in the Pacific are exceptional and even the equestrian and tennis facilities are designed to reflect Kalia’s commitment to the sustainable lifestyle.

Request Information from These International Communities