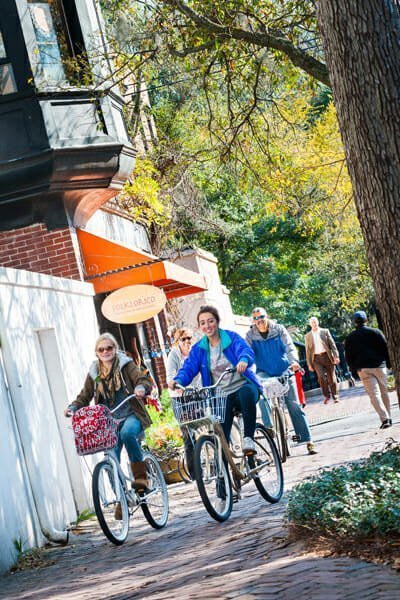 Savannah — Get Transported to Another Time

You’ll be transported to a bygone era as you walk along the cobblestone streets of Savannah, GA, w

ith its manicured gardens and shady oak trees draped with silvery Spanish moss. Take in Savannah’s extraordinary mansions, churches and museums from your seat in a horse-drawn carriage.

Picturesque Savannah is the largest National Historic Landmark District in the country. Many amazing buildings have been saved and restored, including The Olde Pink House (1789), the site of Georgia’s first bank and the Cathedral of St. John the Baptist (1876), one of the city’s most stunning pieces of architecture.

Much of Savannah’s charm lies in strolling through its 22verdant public squares. In Chippewa Square, there’s a magnificent bronze statue of Savannah’s founder, James Edward Oglethorpe. This square is also the place where Tom Hanks sat on a bench and told his life story in the movie Forrest Gump.

Another fantastic green space is Forsyth Park, a 30-acre landmark on the edge of the city’s historic district. The park is home to one of Savannah’s most photographed attractions: a two-tiered cast-iron fountain.

Savannah is also famous for its haunted destinations. Ghost tours abound, including one of the Bonaventure Cemetery. This cemetery is famous because of John Berendt’s book, Midnight in the Garden of Good and Evil, which features a cover photo of the “Bird Girl” statue. The statue has since been moved to the Telfair Museum of Art.

The Telfair Museum of Art houses more than 4,500 works of art: Impressionist paintings, plaster casts of such renowned works as the Venus de Milo and period furniture. The Telfair Museum also includes the Jepson Center and the Owen-Thomas House.

You’ll love walking along the scenic riverfront and watching the ships pass by, and you don’t want to miss taking a relaxing riverboat cruise.

For unique shopping and dining, visit River Street with its 75 boutiques, galleries, restaurants and pubs. Enjoy quirky shops and open-air cafés at the City Market.
Savannah’s historic beauty has made the city world famous, but it’s also famous for its diverse culture and true Southern hospitality. There’s no place quite like Savannah.