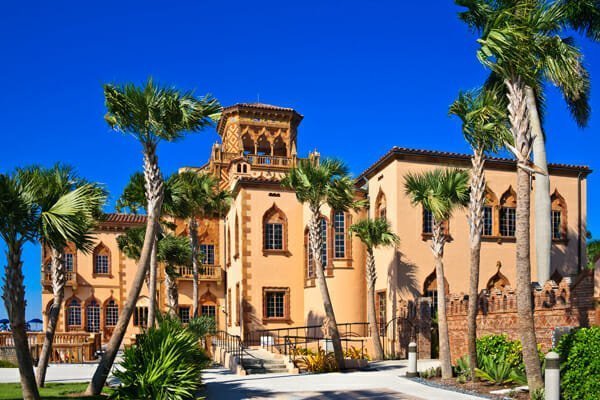 2015 Fall Issue In the Magazine

Ca’ d’Zan. The palatial mansion of John and Mable Ringling. Sarasota, Florida. This landmark home is located at the Ringling Museum of Art. Florida travel destination.

If pristine beaches, high culture, and swanky settings are your scene, then add Sarasota to your list.

Portrait of an Ideal Town

In large part, the famous Armands Circle, is the heartbeat of Sarasota. It hosts more than 140 upscale boutiques, specialty shops, galleries, and restaurants. Altogether, 33 historic statues constitute St. Armands Statue Walk. Most of the statues were purchased by circus king, John Ringling,

Overall, Sarasota owes its arts legacy to Ringling. He introduced and successfully embedded the circus arts culture into the city. Ringling’s vast art collection is now housed at the Ringling Museum of Art.

Equally important to Sarasota’s arts and culture scene are the Sarasota Ballet Company and the Sarasota Symphony.

Ready to see Sarasota for yourself? The Ritz-Carlton, Sarasota, is an idyllic Gulf Coast retreat that affords easy access to the city. Spend the day at the Beach Club at Lido Key with an equally spectacular of the city before you dive into Sarasota’s bustling restaurant and nightlife scene.

• John & Mable Ringling Museum of Art Ca d’Zan is the entertainment mogul’s 32-room Venetian-Gothic mansion on the bay. It’s home to one of the finest collections of art in Florida.
• Marie Selby Botanical Gardens is a haven for kids. They can freely explore rope bridges, caves and even a 12-foot waterfall, all in a mock tropical rainforest environment.
• Mote Marine Aquarium is a must. Similarly spectacular, the aquarium features more than 100 species of marine life, touch pools, a 135,000-gallon shark habitat.
• Sarasota Jungle Gardens is a tropical 10-acre garden and zoological sanctuary, and a family favorite. Children can hand-feed free-roaming flamingos!
• Venice Beach: Just south of Sarasota, Venice Beach is the “Shark Tooth Capital of the World.”