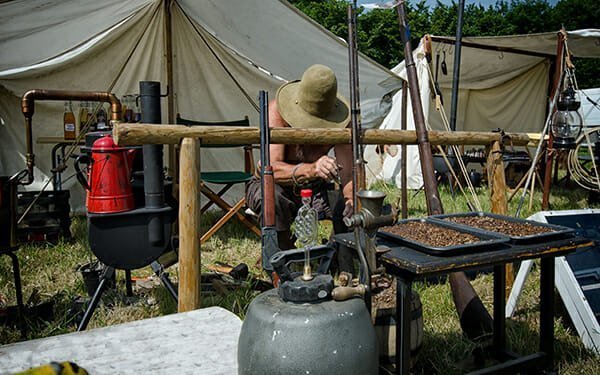 Moonshine flows out of the past and into the mainstream.

By Fanny Slater published in the 2016 Fall issue.

Remember those rowdy 20-something parties where you’d empty every juice in the fridge and a generous helping of clear, high-proof liquor into a bathtub filled with ice? Yeah, me either. But that was kind of the point.

If you’re familiar with this mind-altering backwoods beverage rooted in the peaks of Appalachia, then you know it’s not the new kid on the block. As of recent, moonshine—also dubbed hooch, white whiskey, and white lightning—has exited the past and resurfaced in the present with the same look, same kick, and same appeal it possessed back in the day.

So what’s with the hype?

It might be the cryptic word itself. It might be the lure of outlaw status (as the original hooch was characterized by its illegality). It might be the excessive potency which, via several swigs, arms you with the ability to sing karaoke or think you can fly. Regardless of motive, everyone from bar patrons to bartenders to restaurant owners are on a mission to infuse this distinctive spirit into their world. For those who aim to retail, the lack of barrel aging, cost-effective manufacturing, and quick production make moonshine an ideal product. Craft distilleries are hopping on the trend faster than

Millennials are putting down their Budweisers and picking up Ballast Point.

Pardon my Jerry Seinfeldness in the following inquiry, but what’s the deal with the funny name? Devised from the (super boring) era of Prohibition, the term “moonshine” signified that this secretive, late-night concoction was prepared by the light of the moon. Let’s talk ingredients. Moonshine is made with un-aged (uber harsh tasting), corn-based white whiskey and is commonly mixed with sugar and fruit. And just as with your standard vodkas, rums, and bourbons, “plain” is only the beginning.

Ole Smoky, based in Tennessee, has been one of the major advocates for pushing the moonshine movement forward. Packaged in their signature mason jars, you can sip Ole Smoky Moonshine in every flavor from original to cherry to apple pie to peach. A word to the wise: several of these varieties weigh in at 50 percent-abv, so you might want to drop your dignity at the door. In the Carolinas, Piedmont Distillers leads the game with nearly 10 variations and a nationally distributed brand. For the hipster, Negroni-slinging mixologist, there’s Jacob’s Ghost brought to you by Beam. This moonshine sings a slightly different tune as it’s aged for one year—creating a flexibly flavored, less intense punch in the face.

But can we legitimately call this lawfully-approved spirit “moonshine”? If your grandpa was forced to quietly distill his batch at midnight, but you can grab a jar at the corner store, is it really the same thing? At the end of the day, as long as a bottle provides its promised buzz—us humans are more likely to concern ourselves with pizza toppings rather than historical technicalities.

Today, cocktails permeated with moonshine are offered in upscale bars, grocery stores, chain restaurants, and taprooms all over the country. Stroll through a liquor shop and you’ll be greeted with shelves of the stuff whose packaging stands out like a colonial woman in a line of swimsuit models. Between the farm-to-table movement, nostalgic trends galore, and a drive toward artisanal, handmade, craft everything—it’s clear that this drinkable DeLorean isn’t traveling back to the past anytime soon. 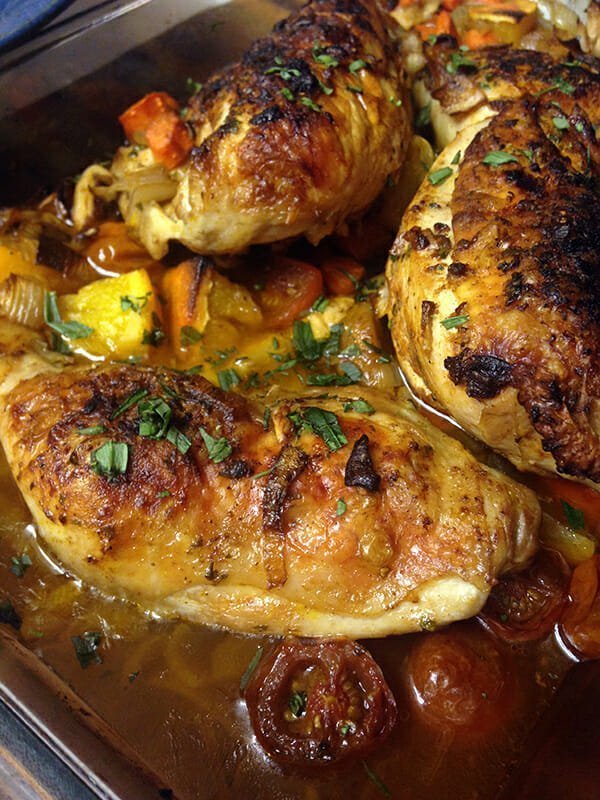 In a large skillet, heat the oil over medium-high heat. Generously season the chicken pieces with salt and pepper on both sides. Working in batches so you don’t overcrowd, sear each piece until crispy (about two minutes per side), and then set aside on a plate.

Reduce the heat to medium and add the butter. Add the shallots, tomatoes, and pineapple and season with salt and pepper. Cook until the shallots are translucent, about three minutes.

Add the moonshine to the pan and scrape any browned bits from the bottom. Add the chicken stock and simmer for five minutes. Transfer this mixture to a baking dish and top with the chicken pieces and all of their juices. Place the dish in the oven and bake until the chicken is cooked through, 35 to 40 minutes.

Remove the chicken pieces from the pan and arrange them on a platter. Pour the sauce over the chicken and garnish with the chopped parsley.