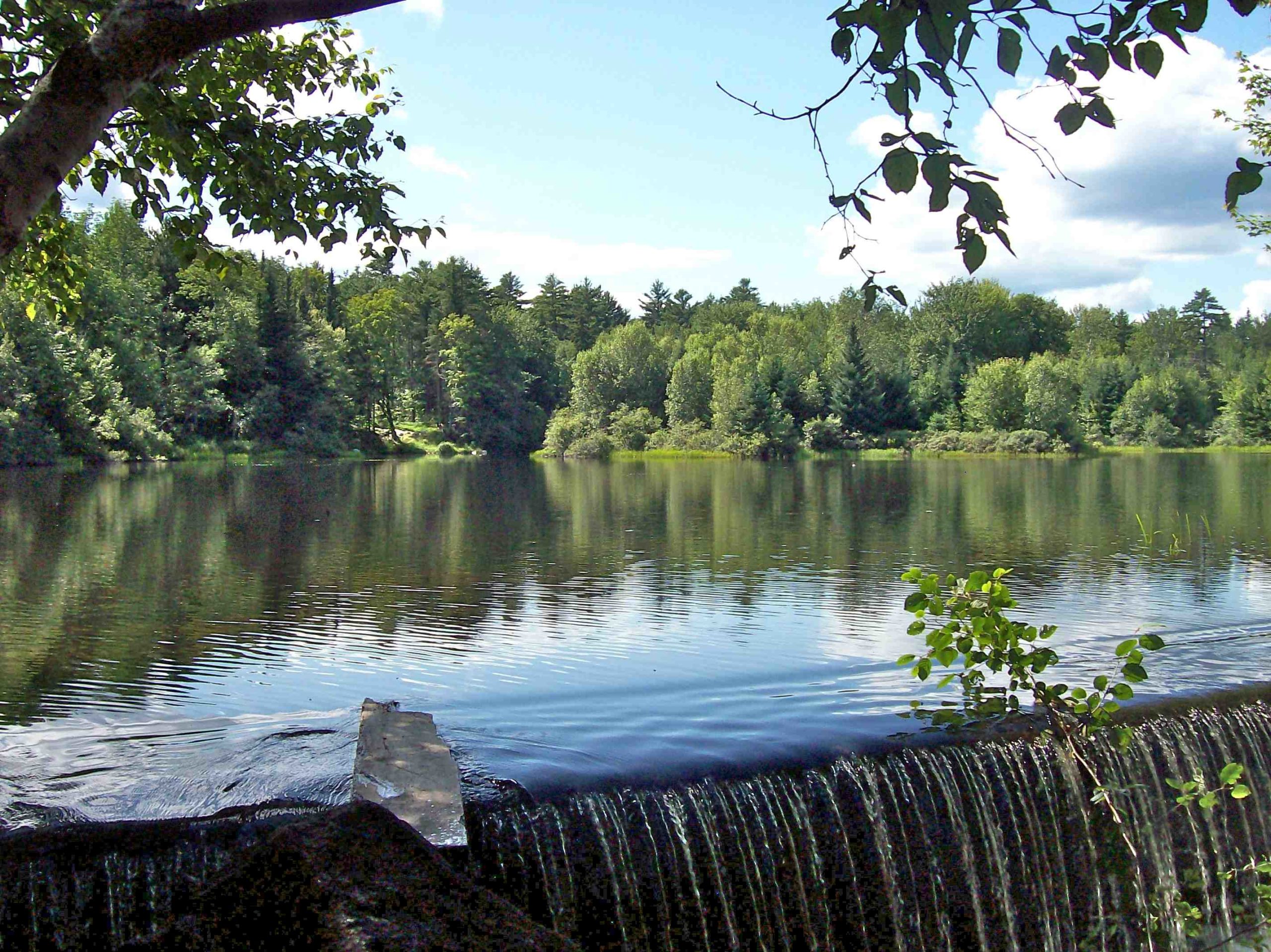 By Craig McArt and Renée Gustafson 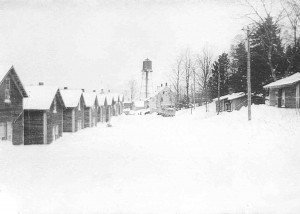 Starting out as just a trickle from Grass Pond near I-89 Exit 14, little Stony Brook parallels Route 10 before angling east to be bolstered by the flow of Butternut Brook. Farther on, it plunges into a millpond where it regains its composure before spilling over a dam and rushing down to Eastman’s West Cove Inlet to become the largest tributary to Eastman Lake. The millpond was created by H.O. Smith, who dammed the brook to supply water for his sawmill in the mid-1800s. Later, it was expanded for a larger mill owned by C.F. Leavitt.

The tranquility of the farmland bordering the millpond was interrupted by a flurry of construction in 1916. In the years preceding, the Draper Company of Hopedale, Massachusetts had been buying up property around Eastman Pond for its timber needs. Now, its bobbin blank mill operation, which had been located in North Newport, was being transferred to North Grantham. In short time a company mill town sprang up beside the millpond. It became known as Draperville.

The purpose of the Draper operation was to supply hardwood blanks from which bobbins would be made for the company’s high-speed textile looms. Having exhausted the supply of maple and birch around Newport, the harvesting of trees for the bobbin blanks began around Eastman Pond. Overnight the population of Grantham doubled as workers poured in to cut and haul timber, run the mill, keep the stable and provide food. Many of the workers brought their families, and as many as 60 children crowded into the one-room North Grantham School House.

As a young girl walking with her grandfather, Wilema Hastings passed through Draperville on her way to Anderson Pond and beyond. What she remembered of it was included in a talk she gave to the Grantham Historical Society in September 2005:

“It was almost a village – cottages for employees, large boarding house, machinery shop, Guernsey dairy herd, 60-head horse barn, water tower, three 12’ x 12’ springs for water, bobbin mill and two or three large boilers with men firing them all the time to keep up steam for power. They wheeled the ashes across a narrow bridge and had the ashes in a pile as big as any sawdust pile I ever saw. The hardwood logs were piled so high they drove horses under the arches they made of logs. The road straight ahead across the river went by the end of Anderson Pond. Partway on the left was a sawmill. The road to the right by Draper Mill went to Eastman Pond. Some of the road was corduroy road, and you could drive a team to Springfield.”

Within nine years, the stands of maple and birch trees had been so depleted that the operation again moved on and Draperville was abandoned. The mill and the water tower were torn down leaving only their concrete foundations and the timbers that supported the machinery. The employee family cottages were auctioned off and moved and the mill machinery sent north to a more permanent operation at Beebe River in Campton – more permanent because there was a railroad to extend the logging range. Most of the workers moved too, and the population of Grantham sank from 550 to about 275. 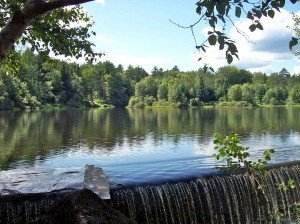 When the Draper Tract came up for sale in 1968 and was purchased for the Eastman development, vestiges of the roads and cellar holes remained, although the millpond had vanished when the dam was broken. Water flow that had been diverted from Anderson Pond to the millpond was rerouted to its original course into Eastman Pond. When the Orr Dam was built in 1972 to increase the size of Eastman Pond, the portion of Stony Brook below the mill site, as well as the corduroy road, were flooded over to become West Cove Inlet.

Today, the millpond has been restored by a concrete dam and new roads and houses surround it. You can reach the dam by taking a trail from Cove Drive where it crosses over a culvert bridge dividing the brook from the inlet. There are discoveries to be found along this short length of trail as it parallels the brook. Immediately to the left lie the ruins of the Draper mill and water tower. Ends of pipes that brought water down from the three springs (one of which remains) on the hill above are exposed. Beyond and across the brook is impressive stonework remaining from the old Leavitt sawmill. And get this: if your timing is right, you can watch the “Eastman Lake Salmon” swimming upstream to spawn here in the spring.

Walkers, runners, kids on bikes and even drivers stop by the bridge to see if the “run” is on. Excitement builds as the salmon fight the current, rest in eddies, and again and again try to swim upstream. People yell, “Look at that one!” “Look how big!” “Come on, you can make it!” You may even hear, “If only I had a bucket.” Newcomers ask, “What kind of fish is it?” And if you want to continue the Eastman tradition you just answer, “Eastman Lake Salmon. You don’t know them? Ask an old timer and maybe he or she can tell you.”

Some purple loosestrife grows at the edge of the millpond and on its little island. Very likely it got there from seeds that drifted down from a colony of this invasive plant upstream along Stony and Butternut Brooks. The Lakes & Streams Committee has been battling this admittedly beautiful plant with an army of beetles that have a taste for purple loosestrife. In 2006, volunteers began distributing this particular beetle species in the area annually; they appear to have been effective in reducing the infestation.

To facilitate dredging of the Mill Pond in 2008, it was necessary to build an access road to the pond from Old Spring Drive. The idea of extending a walking path from there to the dam – one that would follow the pond’s shoreline – has been a topic of some discussion ever since.

Allow your senses to absorb the aura of this place and you can almost hear the clatter of the steam-driven machinery in the mill, the rattling of lumber wagons over the narrow bridge, the laughter of children wading in the millpond, the voice of Bessie Fiffield echoing from the boarding house kitchen. Take a deep breath and allow your imagination to conger up the bobbin mill’s pungent aroma of steam and grease, sawdust and ashes.

The mystique of Draperville by our Mill Pond is very special to Eastman. In it lie historical antecedents of our community. The fact that the Draper Tract came on the market as a “145-acre expandable lake surrounded by nearly 2500 acres of woodlands, fields and meadows” is what made the Eastman development possible.