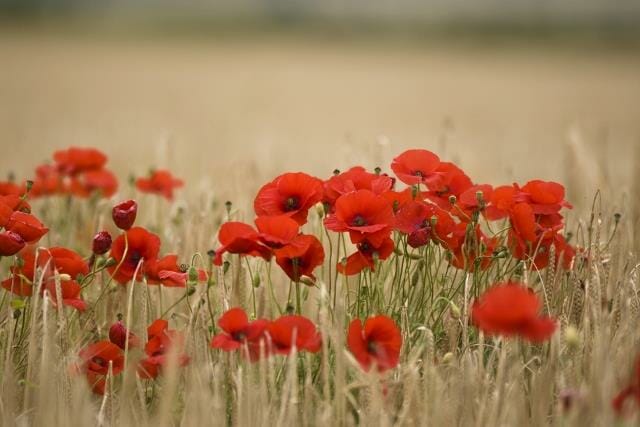 Memorial Day and Its History

Memorial Day and Its History

In 1915 after being inspired by the poem “In Flanders Field” by Jim McCrae, Moina Michael wrote her own poem in reply:

We cherish too, the Poppy red

That grows on fields where valor led,

It seems to signal to the skies

That blood of heroes never dies.

Feeling passionate for the post World War I veterans, Moina Michael decided she would wear a red poppy on Memorial Day in remembrance of all those who had served during the war. She then began to sell these beautiful flowers to friends and neighbors, all of the money she raised going to servicemen in need. Known for her humanitarian efforts as “Poppy Lady”, Moina Michael is the reason Memorial Day is represented by red poppies. In 1921, Moina Michael’s efforts to use the red poppy as a symbol for war veterans was adopted and embraced as a remembrance to war veterans by the American Legion Auxiliary.

Today Memorial Day is still celebrated with a great burst of poppies all over the capitol. Washington D.C. is covered with people celebrating and honoring our veterans by visiting the monuments. The Memorial Day event in D.C. is filled with things to do, from start to finish. One of the biggest events is The National Memorial Day Parade, which is sponsored by the World War II Veterans Committee and includes patriotic floats and giant balloons floating overhead. Another big event is the flags that are placed on over 250,000 graves in the Arlington National Cemetery. This along with many other ceremonies are held at the Arlington National Cemetery, including a wreath laying ceremony, and a ceremony for the women in service, which is located at the front gate.

Another legendary part of the Memorial Day Weekend events in Washington D.C. is the Rolling Thunder Motorcycle Rally, in which thousands of motorcyclists ride through the city in an annual demonstration that promotes an improvement in veteran benefits and to help further resolve POW/MIA issues. There are many more exciting events in the capitol that are an amazing experience for all to see and celebrate during this great day of remembrance for those who have died serving our country.

Wherever you find yourself this Memorial Day, take a moment to remember those who have served our country, and enjoy the time spent with your family and friends.