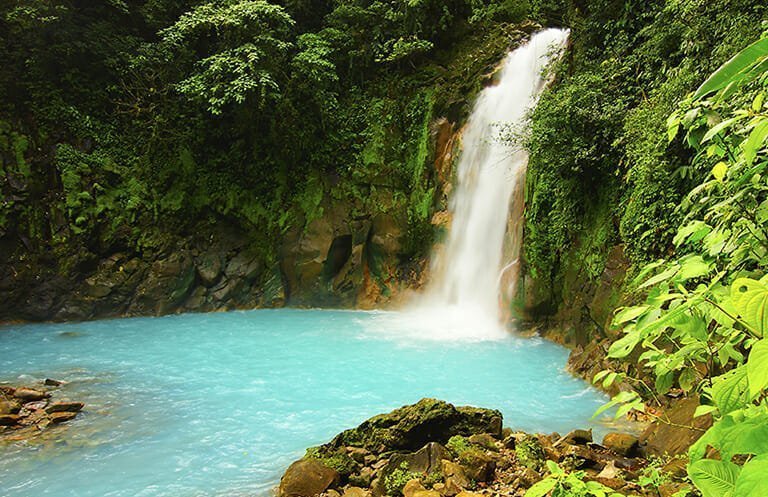 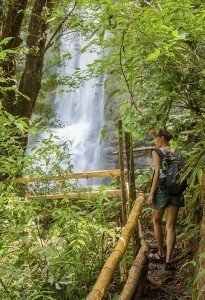 As avid travelers grow tired of hotel-lined beaches and crowded theme parks, they turn to the more exotic adventures offered by ecotourism. This relatively new trend in tourism takes travelers to remote corners of the globe, exposing them to diverse wildlife and cultures that have developed in isolation from the modernized world. Although it is a relatively new trend in travel, ecotourism is the fastest growing sector of the tourism
industry, with an average annual growth rate of 20 to 30 percent. This incredible growth is due in part to the increasing
number of environmentally-conscious people who have taken to ecotourism because it combines an exotic travel experience with the satisfying idea of being socially and environmentally responsible.

Just what is ecotourism? A commonly recognized explanation is “responsible travel to natural areas that conserve the environment and improve the well-being of the local people.” 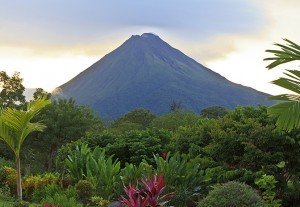 A lush garden in La Fortuna, Costa Rica with Arenal Volcano in the background

With few arguing otherwise, Costa Rica is the leader in this movement, a country that has turned to ecotourism as its key to economic development. Although it’s a small country, about the size of West Virginia, Costa Rica has incredible biodiversity with scenic beaches, lush rain forests, impressive volcanoes and exotic wildlife. Just imagine your surroundings containing over 1,200 kinds of orchids, 1,260 tree species, 361 species of reptiles and amphibians, 237 varieties of mammals and 85 types of birds.

Much of this diverse flora and fauna is protected in 24 national parks that cover 21 percent of the country’s territory, giving Costa Rica’s eco-visitors access to the highest density of plant and animal species on Earth. The creation of this immense park system has changed the nation’s previous rampant destruction of its forests and wildlife. Now, there are protected zones where pristine conditions flourish using the national park system to preserve the diverse environment.Travelers have come in droves to experience nature in its most exotic forms.

Panorama of quiet, beautiful Playa Conchal and the azure waters of the Pacific Ocean in Guanacaste, Costa RIca 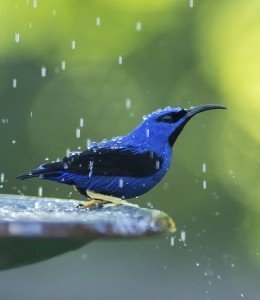 The nation’s tourist industry brings about 2.5 million visitors annually and generates approximately $2 billion a year, making it Costa Rica’s second largest source of income. There is no real way to know how many of these tourists come to specifically experience ecotourism, but the percentage is considered to be very high.

Ecotourism activities involve visits to protected areas like national parks and private reserves, wildlife rescue centers, family-run coffee plantations and organic farms. Opportunities exist to go rafting down rivers, spend days photographing exotic birds, go whale watching in the Pacific Ocean and ride horses across the plains of the Central Valley. The options are as varied as the terrain. 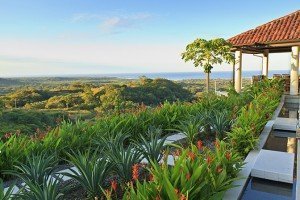 Most nature-conscious tourists begin with a visit to an ecolodge. Ecolodges are intentionally isolated, giving travelers direct, uninterrupted access to the outdoors. Hiking trails extend from their properties and wind through the surrounding forests, hillsides and beaches, but guests need only to look past the hammocks on their porches to be in the midst of nature.

But, where should you start? The country is filled with something for everyone. Let’s take a look at the Guanacaste region bordering the Pacific Ocean in Costa Rica’s far northwest. It’s an area of stunning beauty that is easily accessible from San Jose, the main city. The region has one beautiful beach after another, with first-class accommodations on many.

Today, thanks to the help of ecotourism, everything a visitor could wish for is available close at hand, and there is much to do. Set on the outskirts of Tamarindo, a canopy tour offers travelers a high-flying way to experience the forests of Costa Rica on seven zip line cable 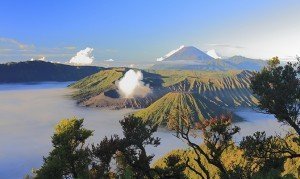 s that extend through the treetops. The calm Corobici River near Liberia, is an excellent river for families looking to float down a gorgeous and gentle jungle river surrounded by nature and wildlife. Or, alternatively, visitors can take a more ambitious rafting trip down the exciting rapids of the Tenorio River. Arenal is one of Costa Rica’s greatest natural wonders, hosting both the country’s most active volcano and its largest lake.

Then there are nine nearby national parks, where you’ll see Costa Rica at its best. A visit to any one of them might well be called a photographer’s paradise. 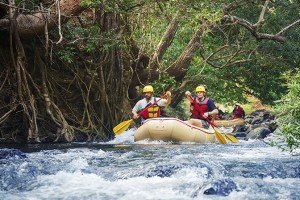 Isla Bolaños National Wildlife Refuge is near the border of Nicaragua. A small boat crossing takes you to the island that has a sanctuary attracting thousands of birds.

Rincón de la Vieja National Park contains an active volcano with nine craters on the summit. Three species of monkeys and more than 200 species of birds reside within the park. 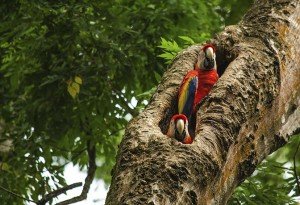 Las Baulas Marine National Park & Tamarindo National Wildlife Refuge offers a beach that is a mecca for turtle watchers, who are always accompanied by a guide to ensure that visitors follow nesting etiquette.

Lomas de Barbudal Biological Reserve is often called the insect park because of the huge number of insects that live within the reserve’s boundaries. For example, more than 250 species of bees can be found in the reserve. But, it’s not just insects. Numerous troops of Howler monkeys live in the tree canopy, along with smaller white-faced Capuchin monkeys. 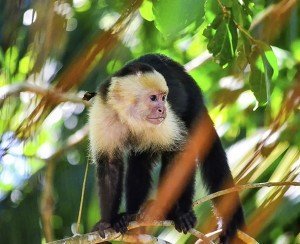 Verde National Park is another ecological paradise. The Laguna Foohas is home to approximately 50,000 birds, with Macaws and small parrots making up a large percentage. Along with two species of monkeys, visitors can find secretive and sleek ocelots and pumas.

Finally, Cabo Blanco Absolute Natural Reserve, located at the tip of the Nicoya Peninsula, contains a large population of marine birds as well as the unusual Collared Peccary, the White-lipped monkey, the Howler monkey, the Kinkajou, the two-toed anteater and the Mexican porcupine.

The best time to visit the northwest’s wildly diverse Guanacaste 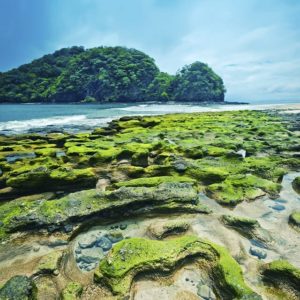 region is in the dry season, which runs from December to April.

Once you’ve been bitten by a love of Costa Rica and all that it has to offer, you might consider the possibility of purchasing a second home and a full-time migration to the area in retirement. There’s no doubt that ecotourism has contributed to the steady influx of foreigners who have become inspired by the beauty and diversity they observed as tourists and returned to become home owners.

As an example, in the Guanacaste Pacific northwest, the Playa Flamingo coast is renowned for its clear warm waters, soft white sand beaches, beautiful evening sunsets and world-class sports fishing.

Today, ecologically-conscious Costa Rica has become a major tourist attraction that combines superb retirement investments with the opportunity of living in one of the world’s most diverse and fascinating locales, much of it couched within the broad envelope of ecotourism. 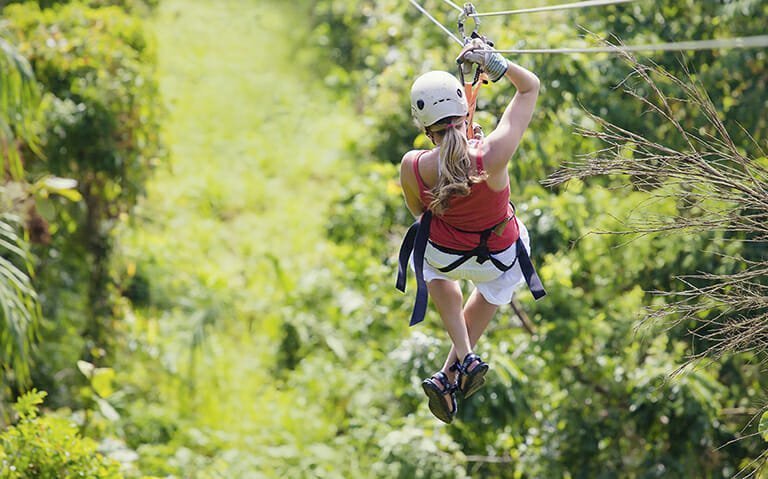 By William Burr Previously published in the 2015 Summer issue.