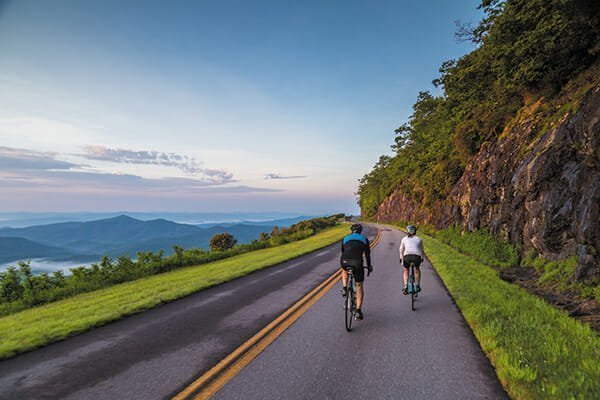 By Jamie Penn. Previously published in the 2016 Fall Issue.

North Carolina is one of those states in which it’s really hard to sit at home. Famous for having it all, the elixir of thick salt spray, fresh mountain air, and the buzzing hum of the piedmont-centered, University-centric towns (Chapel Hill, Raleigh, Durham, Winston-Salem) teeming with activity, art, and culture cancel out a good chunk of couch time for the adventurous or curious at heart.

Topographical variation abounds here, from mountains to piedmont to sea. North Carolina cyclists and state officials have taken full advantage of all the sights and experiences North Carolina boasts along the way by working together to map out nine independent bike routes totaling 3,000 miles of well-marked bike lanes. Routes are all strategically spotted with ‘Share the Road’ signs and small green rectangles notating ‘Two-Wheelers Only’ lanes.

There’s nothing like being a part of the scene you’re passing through. And cycling along under a creamy, burnt-orange sky at sunset from a sweet downtown B&B to a sea oats-lined beach access, or zipping along the Blue Ridge Parkway in October through colors that rival a Kandinsky painting is sure to invoke unrivaled visceral pleasure.

No Lycra? No worries. North Carolina routes are designed for both the beginner and the experienced cyclist, ranging from 120 miles to 700 miles in distance at various elevations. Cycling somewhere in this great state, no matter how far you decide to go, what kind of bike you have, or how equipped you are, is the point here.

“Wilmington is probably the best place to start in North Carolina. It’s flat, for one. But, so are the Outer Banks. The wind is just so fierce in the Outer Banks. And it’s not like that in Wilmington. You may have some wind, but you’re going to get relief one direction or the other.”

And the great thing about starting in Wilmington is that you’re starting in one of the most beautiful spots in North Carolina. The river to sea bikeway is your best bet here. It’s a well-marked, 20-mile route starting at Riverfront Park in downtown Wilmington and ending at Johnnie Mercer’s Pier in Wrightsville Beach.

There are many shorter treks, many of which incorporate designated routes in and around North Carolina cities, which is how Edwards started her cycling journey—the Outer Banks being one of her favorite (if more challenging) trips.

“You’ve got to start small,” she says, “then keep branching out.” And pretty soon, you could find yourself, as Edwards did, traversing the state in segments, en route from Manteo, in the northern potion of the Outer Banks, to Murphy, in the southwestern corner of the state—roughly 700 miles from point to point.

Edwards says that touring North Carolina and elsewhere has changed her life for the better since she started cycling seriously in 2003. The greatest gift, she says, has been a renewed faith in humanity.

“One of my favorite things about touring is the people,” she says. “I’m constantly reminded that there are so many good people in the world. The hospitality and the kindness of random strangers continues to blow me away.”

One of many such stories was her North Carolina loop trip with a couple of friends. They rode into Bath, NC, in the northeastern part of the state, while cycling a section of the NC-designated Ports of Call route one evening looking for a place to stay when they happened upon some parishioners at St. Clair Church of Christ. Before they knew it, they found themselves at a potluck dinner at a small church festival, and later, inside sleeping in the cozy church quarters.

Bath is just one of the charming coastal towns boasting good people on the Ports of Call route. From Edenton and Bath, to history-rich New Bern, Wilmington, and the quaint fishing village of Southport, a leg or two of this 300-mile ride is so worth it.

If you decide to explore Bath, near the mouth of the Pamlico River, it won’t take long. It’s less than a square mile in size—a tiny, but super-pretty spot on the map. Cycling to New Bern is a trek, with the Aurora-Bayview ferry ride across the Pamlico, so plan to arrive late, and consider staying at one of Pollock Street’s many charming B&Bs. After a hearty breakfast and a stroll downtown where the Trent and Neuse rivers meet, a quick ride (or walk along the Riverwalk) to the majestic Tryon Palace is recommended. It’s a historic site not to be missed if you’re in the area.

The trip from Maysville, at the edge of the gorgeous Croatan National Forest (great campgrounds for those super-adventurous, tent-packing cyclists), to Wilmington and then on to Southport is one pretty back road after the next, flanked with farms, pine forests, and small, Southern towns.

Extending the trip from Wilmington to Southport via the Fort Fisher Ferry is a borderline must. Dinner at Provision Company at the docks in Southport is all ambiance in this quintessential fishing village. If you have time to spare, the ferry ride to Bald Head Island will take you to a sanctuary of natural beauty, with no gas-powered vehicles allowed. Warning: jumping on a sail boat, paddle board, or kayak could occur at any moment here, so give yourself a little time to explore.

Another popular route, one of which Edwards has taken advantage of, is the Southern Highlands route. But, it’s not for the faint at heart.

While Edwards started small 14 years ago, cycling is now her life. She has more bicycles in her living room than furniture, and rarely gets in a car. Three of her four children have cycled across the country with her, and she has worked in a bike shop for 13 years. So, needless to say, she knows her stuff and a little elevation doesn’t scare her.

The Southern Highlands route is all Blue Ridge mountains at varying degrees, starting in one of Edwards’ favorite places, Brevard, NC. The good news is, its mostly downhill from there to Lincolnton, 120 miles away.

“I love waterfalls,” Edwards says. So, she’s in heaven on the section of this route that runs through Pisgah National Forest to Brevard. Looking Glass Falls is definitely the most popular, but there are dozens just a quick hike away from where you park your bike at trailheads.

The mountains to sea trail, running through the northern section of the Blue Ridge, is Edwards’ favorite mountain route, where she and her husband, Robert, have taken time out for hiking, whitewater rafting on the French Broad, and daytrips to places like Cashiers and Franklin. When she’s not on the Blue Ridge, she’s dreaming about it.

Edwards is a diehard camper and an on-the-trail chef, but she and Robert have been known to treat themselves to a B&B or two. She highly recommends the Big Lynn Lodge in Little Switzerland just off the Blue Ridge Parkway.

“Sometimes you just need some pampering,” she notes.

Given that Edwards is a paniers-toting (bags that attach to the bike), tent-carrying, MSR Simmer Lite stove-cooking, gear-heavy cyclist, she has spent tons of time in state parks and has found that they don’t have to be in the mountains to be breathtaking.

“It’s kind of surprising, but Umstead State Park in Raleigh is really gorgeous,” she says. The Mountains to Sea route runs through it, and cycling the walking/bike trail (the Greenway trail) that runs through the park, Edwards says, is a must.

There’s so much to explore, culturally and otherwise, in the Triangle area. So, if you’re up for roughing it at the William B. Umstead State Park campground, go for it. If not, there are tons of B&B options in the area.

Again, you don’t have to be a gear-head or have a bike like Edwards (a custom Litespeed® touring bike) to ride these routes, but spending some time at a bike shop and chatting up someone like Edwards is always a great move. And while North Carolina routes are bike-friendly, err on the cautious side by throwing in your Niterider® front and rear lights, and your Take a Look® mirror for your glasses. For more information on how to do it Edwards-style, check out crazyguyonabike.com and the cyclists-hosting-cyclists social site, warmshowers.org for places to crash or tent-camp along the way.

The most important thing to remember when biking North Carolina, no matter how or where you decide to do it, is to lean in and enjoy the ride.