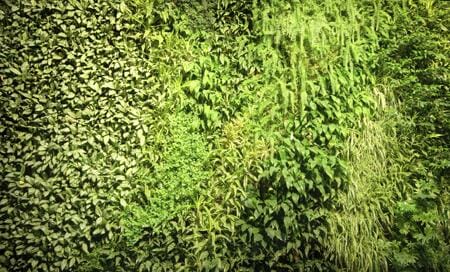 The self-proclaimed creator of the vertical garden concept, French botanist Patrick Blanc, pioneered the use of hydroponic cultivation techniques—plants grow in an irrigated mineral nutrient solution without the need for a soil substrate—to create large green wall
installations in both residential settings and within larger public structures and even office buildings from Singapore to San Francisco and points in between.

Blanc’s installations start by placing a metal frame on a load-bearing wall or structure. The frame supports a 10-millimeter-thick PVC plate, upon which are stapled two three-millimeter-thick layers of polyamide felt. “These layers mimic cliff-growing mosses and support the roots of many plants,” he says, adding that a network of pipes and valves provides a nutrient solution of dissolved minerals needed for plant growth. “The felt is soaked by capillary action with this nutrient solution, which flows down the wall by gravity.” 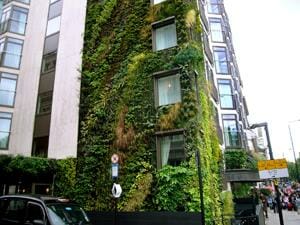 “The roots of the plants take up the nutrients they need, and excess water is collected at the bottom of the wall by a gutter before being re-injected into the network of pipes. The system works in a closed circuit.” Plants are chosen for their ability to grow in this type of environment and depending on available light.

“Each vertical garden is a unique wall composition of various types of plants that has to take into account the specific surroundings of the place in which it is created,” says landscape architect Michael Hellgren, who founded the firm Vertical Garden Design in 2004. “It is not only the colorful interplay between the plants on a ‘green wall’ that is fascinating, but also the appearance of the wall itself, which changes daily.”

Hellgren, who has designed and implemented large green walls in his home country of Sweden as well as in Spain, Portugal and Italy, among other locales, sources plants for his projects from various climate zones around the world. His favorites are so-called “lithophytes,” plants that can grow on rocks, branches and tree trunks without necessarily being rooted in soil. “Among other things, these climbing plants have the enormous advantage of their roots acting as excellent natural drainage on the wall,” he adds.

While large “vertical gardens” are surely impressive, critics question the sustainability of such endeavors, given the energy inputs needed to run the pumps and other equipment used to maintain proper nutrient and air flows, and the emissions caused by the manufacture and transport of specialized materials. Also, larger green walls need more water than rain alone can provide, and thus don’t necessarily save water. But as the field matures, practitioners are finding wider arrays of plants to choose from that are better at taking care of themselves—and scaling back on inputs and supporting machinery with the hope that one day many of the walls will be self-sustaining gardens that cleanse our dirty air and compromised storm water.