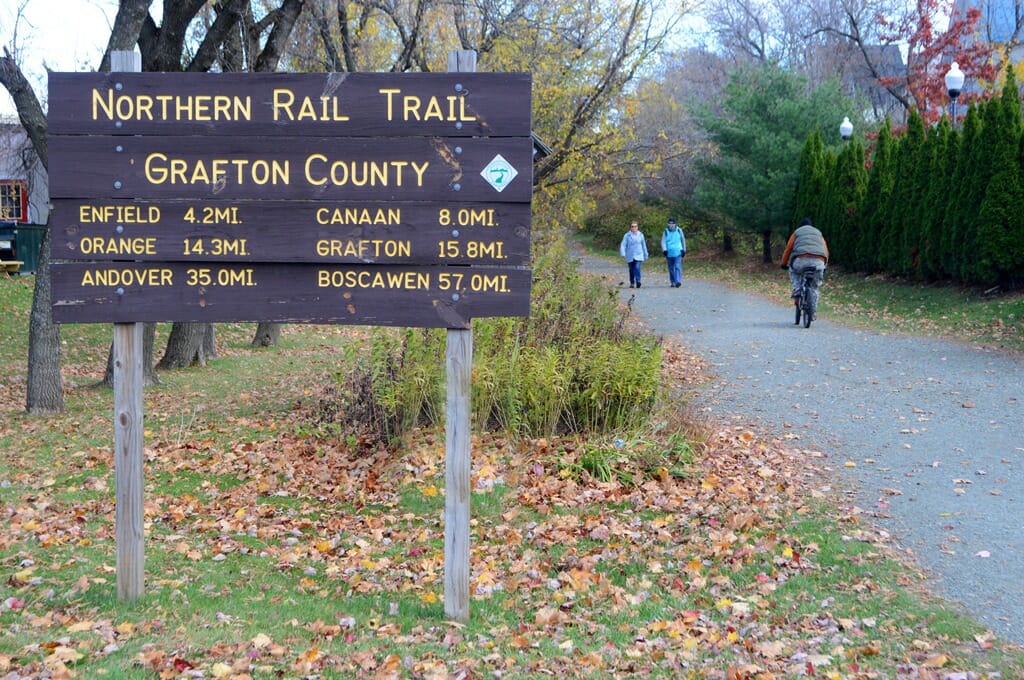 A Trail for All Seasons

A Trail for All Seasons

Story and Photos by Richard Sachs 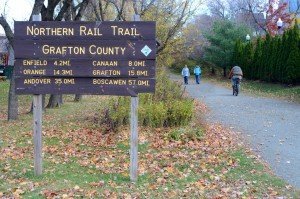 Are you familiar with the Northern Rail Trail? When you drive up to Lebanon, you go right over it. This well used recreational gem passes under I-89 just past Exit 17, at about the 54.4-mile marker. If you can (safely) look over the guardrail, you will just spot it. This is the western end of it, which runs from downtown Enfield to Lebanon, roughly following the Mascoma River and the northern shore of Mascoma Lake, ending up at the parking lot behind the Upper Valley Senior Center, just off the town square and Colburn Park.

The trail is just bursting into spring glory, a paradise, especially for wildflower enthusiasts and birders. It goes through amazingly diverse habitats so that all sorts of blossoms and birds abound. The open grass pastures and hay fields in Canaan and Lebanon are prime feeding sites for the chestnut-sided warbler, the house wren and the mockingbird and are home to periwinkle and red and white clover. The edges of these fields are nesting grounds for the shy catbird and the magnificent eastern bluebird, and home to the delicate chokecherry. Hawks and falcons can be spotted hunting for small mammals and amphibians (and, yes, smaller birds) in these fields, especially right after haying. Kilton and Tewksbury Ponds in Grafton are home to families of wood ducks, mergansers (common and hooded), mallards and geese. In the rocky edges of these ponds can be found bearberry blossoms.

Mascoma Lake in Enfield is able to support all of these as well as a family of loons. Next to the lake are watery impounds where pitcher plants and pickerelweed are spotted. The denser woods of western Enfield and Lebanon, where the trees form a continuous canopy over the trail, are favorite haunts for turkeys, nuthatches, wrens, warblers and sparrows and prime territory for the pink lady’s slipper and purple trillium. The many “snags,” or standing dead trees, are favorite nesting and feeding stations for our native collection of black and white woodpeckers, each species with its own distinctive, emblematic red embellishment.

Part of a nationwide movement to reclaim unused railroad rights-of-way for regional multi-use recreation, the Northern Rail Trail roughly parallels NH Route 4 from Lebanon to Concord. Our section, developed mainly by the Friends of the Northern Rail Trail in Grafton County, has seen slow but steady emergence over the last 20 or 30 years. Parts of it that were dense, impassable brambles of weeds and thickets, tumbling over stumps and decaying railroad ties, have been replaced by gravel paths under open skies, hugging ponds, pastures and brooks. In spots, you can still find piles of wooden ties just off the trail, slowly decomposing and returning organic richness to the soil. Recent improvements have included repainting of the mile markers, showing the remaining distance from the original White River Junction terminus on one side and to Boston on the other. 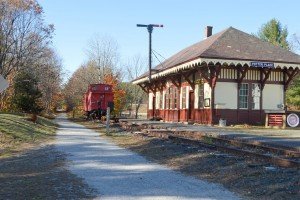 When the spring rains and drainage have abated, the summer season sees the heaviest use of the trail. Baby-strollers, joggers, dogs on leashes, and bicycles of every description crowd the trail, especially on weekends. This is when the trail looks and feels different, depending upon the mode and speed of travel. To the walker and jogger, each tree is unique, each blossom has its distinctive aroma. The bridges across the rivers are scenic tarrying spots with opportunities to meditate on moving water and perhaps see beavers, turtles, deer or herons. Shyer otters, bears and eagles are occasionally spotted.

To the cyclist, the terrain whizzes past, the wildlife less examined, and the bridges are just bottlenecks that get in the way of faster travel. Some areas are densely packed surfaces, friendly even to sleek road bikes. Others are rocky or sandy, and safe only for the wide, nubby tires of all-terrain bicycles. There are even bikes with tires and suspensions tailored to the needs of winter cyclists who can cruise easily on snow and ice. And the exotic looking, low-slung recumbent bikes are well represented. But the best part for all is miles of cycling with no cars to dodge and no trucks to push you off the road. Many parts have conveniently placed benches, especially at the most scenic spots, for a rest and perhaps a restorative drink or snack.

The Northern Rail Trail follows the right-of-way of the Boston and Maine Railway’s Northern Line dating from 1847. Last autumn saw the completion of the trail, which was celebrated with the “Rail Trail Run & Ride” festival on September 27. It now extends 52 miles from Lebanon to Concord, with the eastern half under the stewardship of the Friends of the Rail Trail in Merrimack County. There are plans to extend the trail south, all the way to the Massachusetts border. (A western expansion, the Mascoma River Greenway, running through downtown Lebanon and on to West Lebanon and the Connecticut River is in the planning stage.) It was designated one of the top 100 rail trails in the country and was featured as the Trail of the Month in March 2013 by the Rails-to-Trails Conservancy, based in Washington, D.C. 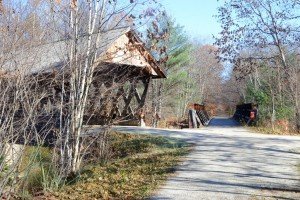 3. In Andover, the trail follows the Blackwater River, which is spanned by the Keniston covered bridge (dating from 1882).

For many, the autumn is the best time to travel the Rail Trail. The flies and mosquitos have packed it in for the season, and the trees put on their spectacular color show. While the blazing reds and oranges of the maples are a given, the shortening days treat us to an amazing display of bright scarlet ash trees, fiery gold beeches, and the startling crimson of the sumac fruit clusters, called “bobs,” that appear most frequently by the streams. The milkweed seeds on tufts of cotton fill the air, and the thistles find their way onto our socks and pant cuffs. While they ride the path year-`round, fall is the time most friendly to horses and their riders, who most enjoy the trails when the pack is hard and dry and the crowds are sparser, so high speed, exhilarating gallops are possible without intimidating the more leisurely travelers.

After the leaves have fallen, the bikes are stowed and the temperatures drop, the trail takes on its winter splendor. The air is crisp and clean with the occasional waft of wood smoke. The course is wide, flat and straight, with collections of bright red winterberry along the edges. The cross-country skier who favors the long stride skating technique is rewarded with miles of ideal terrain. The snow pack, well pressed and leveled by the snowmobiles, allows the graceful glide we marvel at during the Nordic Olympic events shown on TV. Some of the skiers and snowshoe enthusiasts had been fearful of the snowmobilers; they’ve been pleasantly surprised that the motorized troops slow way down for pedestrians and skiers, giving them a wide berth and usually the right of way. Some even announce how many are in their party, so the slower travelers knew how many of these machines to let by before continuing their trek. 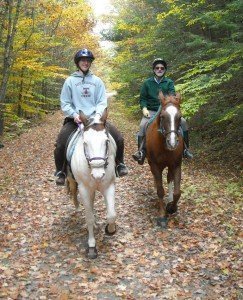 1. On the trail, in Canaan, are Richard atop Youngin and his niece Samantha riding Esperanza.

Where are the best places to access the trail? Well-marked, paved parking lots are at Spencer Street in Lebanon and on Main Street in Enfield. An
off-road parking area is on Ice House Road on the northern shore of Mascoma Lake, just off Route 4 in eastern Lebanon. There is room to pull a car off the street at either end of Blackwater Road in Enfield or Potato Road in Canaan. Farther east, the town of Danbury has easy access right by the town’s Community Building. And one of the most charming spots is by the old railroad station at Potter Place in Andover, dating from 1874. This depot houses a railroad museum maintained by the Andover Historical Society, complete with fully furnished stationmaster’s office, an antique caboose and a restored freight boxcar.

The Northern Rail Trail is certainly a treasure for all seasons. Close by, easy to get to and a perennial paradise, it is well worth the visit. Whether you bike, ski, stroll or travel on horseback, the trail beckons year round.

For maps, trail conditions and special events, consult these resources:

Friends of the Northern Rail Trail in Grafton County: www.northernrailtrail.org

Friends of the Northern Rail Trail in Merrimack County: www.fnrt.org

Request Information from Communities with Trails