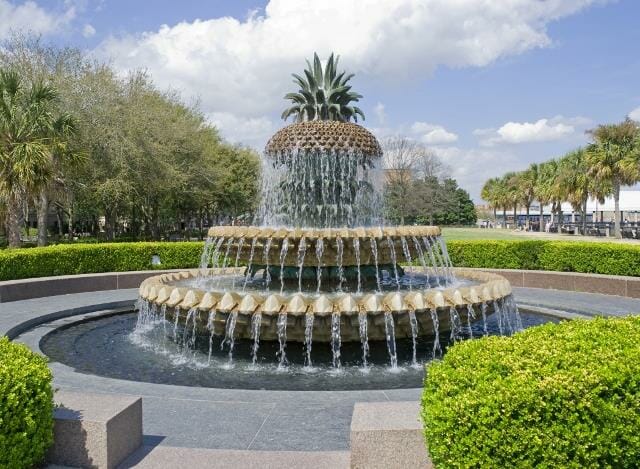 A sign of hospitality across the South and the Caribbean, the pineapple was, historically, a rare and luxurious fruit. Before modern technology and fast transportation, it symbolized extravagance and wealth because fresh pineapple was so hard to come by. It is thought that the pineapple originated in South America, in Brazil and Paraguay, but it has spread throughout the world due to its presence on ships as a superstition to ward off scurvy. Today, the pineapple is less of a symbol of luxury and more of a sign that all are welcome.

The pineapple has moved to showing up in art and popular culture, decorating the bedposts of Carolinians. A bedroom with pineapples carved into the bedposts was often for guests. If the posts were removed, a guest was said to know that he had overstayed his welcome. With the invention of steamships in the early 20th century, pineapples became a widespread commodity and can be purchased almost year-round.

The botanical name for pineapple is Ananas comosus (Bromeliaceae), but it was the English who came up with the name pineapple because they look like pine cones, but are sweet like apples.

The fruit is uniquely Southern, a strong and prickly outside with a sweet core. The fruit is traditionally set out in the center of the table during a festive meal to symbolize welcome and hospitality to visitors.

It’s amazing that one fruit could be so rich in health benefits and symbolism. The history and meaning of the pineapple symbol stretches from its origins in South American, across to Europe and Asia, where it is currently grown en masse, to Australia, where it was first introduced in the 1830s by Lutheran missionaries.

So, if you’re planning a visit to the South, start looking around for the pineapple symbol. You might find a stone one on a neighbor’s porch or on the bedposts of a guest bed. You might be invited to a dinner where a pineapple forms the centerpiece of the table. If you see any of these things, know that the meaning behind them is to give you a gracious and long-lasting welcome into the home of your friends.

Request Information from These Communities