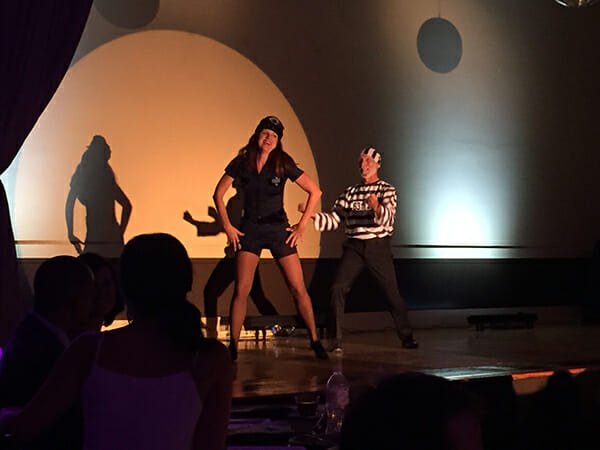 Something New and Special Every Year

By Emily Hackeling. Previously published in the 2016 Fall issue.

It’s noon on a Tuesday, and my phone rings. I answered, expecting to talk with Tony Viollis, the St. Mary School Athletic Director, about his retirement before I headed to work. I had no clue I’d hang up with a radically different perspective on my run-of-the-mill day ahead.

Tony just spent the morning in the St. Mary School gym. He’d been painting motivational Biblical quotes—the same ones used by Peyton Manning when he retired from the Broncos—on the walls to inspire his Kindergarten through 8th-grade student athletes.

Today’s not the only day he’s spent significant time toiling in that gym. Since he started at St. Mary nearly seven years ago, he’s changed the ghost of a building into a place where students play, lead, and grow.

Tony formed the athletics booster club. He held a 5k and Fun Run to put protective pads over the yellowed cinderblock walls. He restored and put protective shades on the towering walls of broken windows that were once taped up with lunch trays. Also new? The state-of-the-art sound system to play music and announce players’ names. The energy-efficient lighting, the new hot water heater, the entire concession stand, new sports uniforms, and most recently, the brand new gym floor.

“I want to have something new and special every year,” he says. What’s surprising about all this hard work and long-term planning for these school improvements? Tony retired seven years ago.

“I’m a Jack of All Trades,” Tony laughs as he talks about his 38 years in the education system in New York. He was a physical education teacher, a coach, a driver’s education instructor, and more. When it felt right for him to retire, he and his wife moved south to Wilmington, NC, to be near family.

“I fell in love with it instantly—the weather, the beautiful beaches, and the people—you can walk into a store and meet the friendliest people anywhere, people who are always willing to help,” he says.

When I ask him about how he got to be so involved volunteering at St. Mary, he lets out a chuckle. “That’s the funniest thing,” he says. Right after he moved, Tony planned on spending time with family, continuing part-time working at Fox Sports, riding his bike, playing golf, and just keeping active.

That lasted only a few months, until his neighbor, a St. Mary parishioner, mentioned the school needed a part-time physical education teacher for a few months.

“Their former instructor was on maternity leave, so it was just for a few months—just until November. Then it became December,” he says, “And here we are, almost seven years later!”

“I like kids, and I have a passion for being creative. I could have walked away at any moment, but I just could not let go of working at the school. It was sort of meant to be.”

A constant advocate of the way sports inspire leadership, hard work, and self expression in kids, Tony has dedicated his retirement to transforming the way St. Mary School views athletics.

“Coaches and athletes are such important role models for the students—it’s not about how good you are, it’s about how you conduct yourself and your attitude on and off the court,” he says.

His infectious attitude is well-known throughout the school, which is why the Home and School Association asked him to do a routine for their Dancing with the Stars fundraiser last year. It was a no-brainier for him.

“I’m not shy … I had to shake and bake a little, you know? And I don’t mind laughing at myself.”

Tony and his partner, a former Philadelphia Eagles cheerleader, brought down the house with a jaw-dropping Jailhouse Rock routine. “I thought we’d be asked to go on ABC on the real show!” You can find the video on Facebook, where it’s gotten more than 1,800 views.

“It’s important to show kids that dancing is fun, and you don’t have to care about what anyone thinks,” he points out.

Tony says he never looks back and misses his career; he knew it was time to change it up. “Now I can watch Duke play as much as I want,” he taunts, picking fun at my die-hard Tar Heel family.

“You shouldn’t just jump into retirement to get away from what you’re doing—you gotta know what you want to do when you wake up in the morning. Have a passion or goal set in your mind,” he says. “Don’t talk about your illnesses and your aches and pains … just do everything you want to do, and always dance!” he adds.

“Retirement to me is maybe not working all the time, but just doing all of what you like to do.”

Tony’s retirement hasn’t been about ending roles—it’s about taking on even more. He’s a coach, physical education teacher, and motivator for St. Mary students. He’s also a painter, gym repairman, celebrity on Dancing with the Stars, and, of course, he’s a die-hard fan. Because that’s what he likes to do.

As I hang up the phone, I head back to work—to write. It was no longer a regular Tuesday. It was an opportunity to do what I enjoy. What day could be better than that?