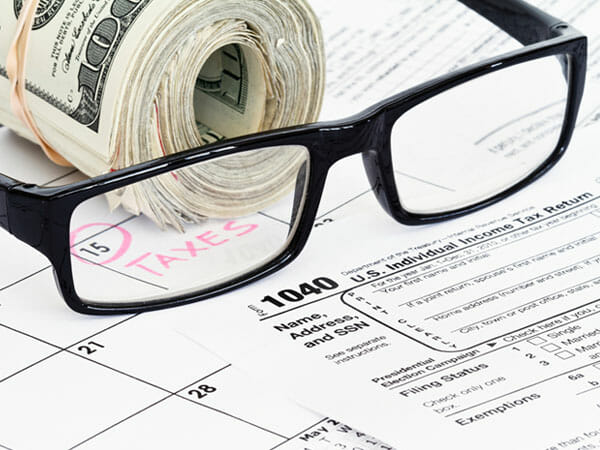 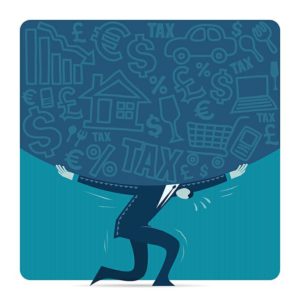 Seven tax-friendly states you may want to consider.

There are so many things to think about when you’re exploring places you may want to  retire to: location, climate, entertainment and recreation opportunities, and more. Finding the most tax-friendly state for you and your household is also an important consideration.

Note: The information below about state taxes is intended as a general overview for comparative purposes. Applicability and exemption qualifications may be affected by a variety of factors, especially with regard to property taxes. Consult your accountant or tax advisor before making any tax-related decisions.

It’s important to realize that there are many other tax-friendly states than these listed below. Though not mentioned below, North Carolina has recently implemented tax changes to make it more friendly to businesses and retirees.

As you research the tax friendliness of the states you’re considering for retirement, be certain to check for revised tax laws. Also note the trade-offs: Some states with no income tax impose above-average sales taxes or higher property taxes. It’s vital that you get the whole tax picture to make the best decision for your tax savings.

With that said, on the following pages are seven states that offer a friendly tax picture for retirees.

The Volunteer State has much to admire, including mountains, lakes, four seasons, a temperate climate, and the Grand Ole Opry. 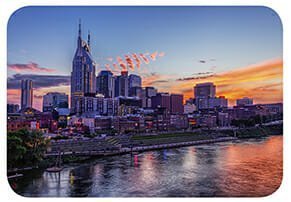 Tennessee levies no personal income tax on wages and salaries, but does tax income from dividends, interest and the like at a flat rate of 6%. Taxpayers 65 or older with a total income from all sources of $33,000 or less ($59,000 or less for joint filers) are exempt. The state has been phasing out its estate tax, which will be eliminated in 2016.

Tennessee has a 7% state sales tax, but certain basic food items are taxed at just 5.25%. Additional local-option sales taxes may range from 1% to 2.75%.

According to the Tax Foundation, a non-profit and non-partisan research organization founded in 1937, Tennessee’s per capita combined (state and local) property tax collections rank as the 9th lowest among all states, and the 2011 overall tax burden of 7.6% ranks as the 6th lowest, well below the national average of 9.8%. Residents pay about $2,777 per capita in state and local taxes.

Tennessee also has a low overall cost-of-living score of 87 based on the U.S. average of 100, according to Sperling’s Best Places.* 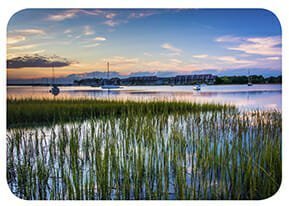 Retirees also love South Carolina because of its low taxes. The state’s personal income tax consists of five brackets and a top rate of 7%. South Carolina doesn’t have an estate tax and it doesn’t tax Social Security benefits.

Beginning the first year you receive qualified retirement income, and until you reach age 65, you can take an annual deduction of up to $3,000. At age 65, the deduction increases to a maximum of $15,000 on any source of income.

South Carolina’s state and local income tax collections per person were $659 in 2012, which ranked 16th lowest nationally, according to the Tax Foundation. The state’s sales tax is 6%, with some local governments adding an additional 1%.

The Tax Foundation ranks South Carolina as the 18th lowest state in per capita property tax collections and its 2011 overall tax burden of 8.3% as the 9th lowest out of 50 states. South Carolina’s taxpayers pay around $2,784 per capita in state and local taxes.

Florida—Tax-Free Fun in the Sun

There are many reasons to love the Sunshine State: warm weather, diverse landscapes and cultures, the beautiful Everglades, glorious oranges, and key lime pie. 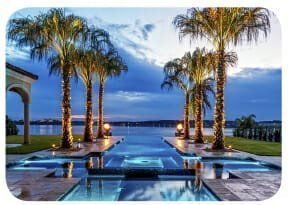 Add Florida’s low taxes to the mix and you can understand why Florida is such a popular place for retirement. Florida levies no individual income tax, and if you receive a pension, the entire amount is yours to enjoy tax-free. Any other sources of income, including earnings from a job, annuities, and Social Security benefits are all non-taxable. Florida also has no estate or inheritance tax.

The state’s sales tax is 6%. Counties in Florida may impose additional sales tax surcharges on the first $5,000 of the purchase price for certain transactions.

Although Florida’s state government doesn’t collect any property taxes, local governments do. These tax rates are assessed at the local level and can vary by county.

The Tax Foundation finds that Florida’s 2011 overall tax burden of 9.2% ranks 20th lowest out of 50 states. Florida’s taxpayers pay about $3,699 per capita in state and local taxes.

According to Sperling’s Best Places, Florida’s overall cost of living score is 99, just below the national average of 100.

Arizona is also one of the most tax-friendly states in the country. Arizona’s personal income tax consists of five brackets and a top rate of 4.54%. The state ranks 13th lowest among states levying individual income tax.

Arizona’s state and local income tax collections per person were $475 in 2012, which ranked 10th lowest nationally, according to the Tax Foundation. Arizona has no estate or inheritance tax and doesn’t tax Social Security. Generally, the same portion of your pension that is taxed by the federal government will be taxed by the state of Arizona. 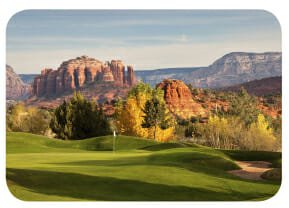 The state’s sales tax is 5.6%, but food for home consumption and prescribed medicines are exempt. Arizona counties and some municipalities levy additional local sales taxes.

Per the Tax Foundation, the state’s per capita property tax collections rank as the 20th lowest among the states and its 2011 overall tax burden of 8.9% ranks 17th lowest. Arizona’s taxpayers pay about $3,194 per capita in state and local taxes.

Sperling’s Best Places gives Arizona’s overall cost of living score as 102 based on the U.S. average of 100.

Living in “The First State,” you’ll enjoy pristine beaches, and the renowned Chateau Country with the DuPont family’s grand mansions and lush gardens. Follow the Delaware Outdoor Trail to ex 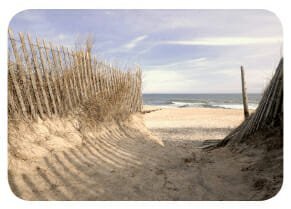 perience a variety of outdoor adventures, and don’t forget the joy of tax-free shopping.

Delaware’s 0% sales tax is just one reason retirees find the state appealing. Delaware doesn’t have an inheritance tax and doesn’t tax Social Security benefits. An individual taxpayer 60 or older may deduct pension amounts up to $12,500.

Delaware per capita property tax collections rank it as the 6th lowest state nationally and taxpayers pay about $4,209 per capita in state and local taxes, according to the Tax Foundation. Sperling’s Best Places gives Delaware an overall cost of living score of 110 compared to the national average of 100.

The Silver State conjures up images of casinos, but Nevada offers much more than that. Retirees can enjoy the breathtaking Sierra Nevada Mountains, or the Mojave Desert where the lights of Las Vegas shine. 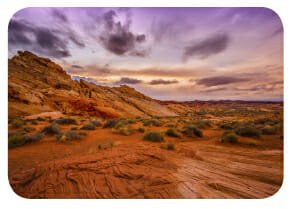 For people who love the water, there are plenty of options including Lake Mead in the south, the Humboldt River in the north, and the cobalt blue waters of Lake Tahoe.

Nevada is an attractive place to retire because there’s no state income tax, and no estate or inheritance tax. The state’s sales tax is 6.85%, which is slightly increased in some counties with the addition of local-option sales taxes.

The Tax Foundation ranks Nevada’s per capita property tax collections as the 17th lowest nationally and its 2011overall tax burden of 8.1% as the 8th lowest. Nevada’s taxpayers pay around $3,221 per capita in state and local taxes.

According to Sperling’s Best Places, Nevada’s overall cost of living score is 102 compared to the U.S. average of 100.

If you’ve got Georgia on your mind, you’ll find that the Peach State offers a mild climate, abundant natural wonders, and quintessential Southern charm. 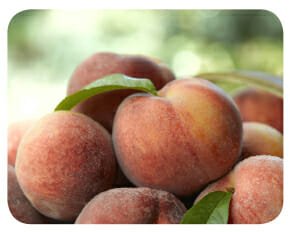 Georgia’s low taxes also add to its appeal. Georgia doesn’t tax Social Security benefits and it has no estate or inheritance tax. The state’s personal income tax consists of six brackets and a top rate of 6%.

The state’s sales tax is 4%, but some local jurisdictions may impose additional sales taxes. However, prescription drugs, certain medical devices and many grocery items are exempt from sales taxes.

According to the Tax Foundation, Georgia’s state and local income tax collections per person were $826 in 2012, which ranked 21st lowest nationally. The state also ranks as the 18th lowest in per capita combined property tax collections, and its 2011 overall tax burden of 8.8% ranks as the 16th lowest. Georgia’s taxpayers pay about $3,237 per capita in state and local taxes.

Sperling’s Best Places notes that Georgia’s overall cost of living score is 92 based on the U.S. average of 100.

Previously published in the 2016 Winter Issue.

*Sperling’s Best Places is a private research company that publishes data and creates comparative indices based on available public information.