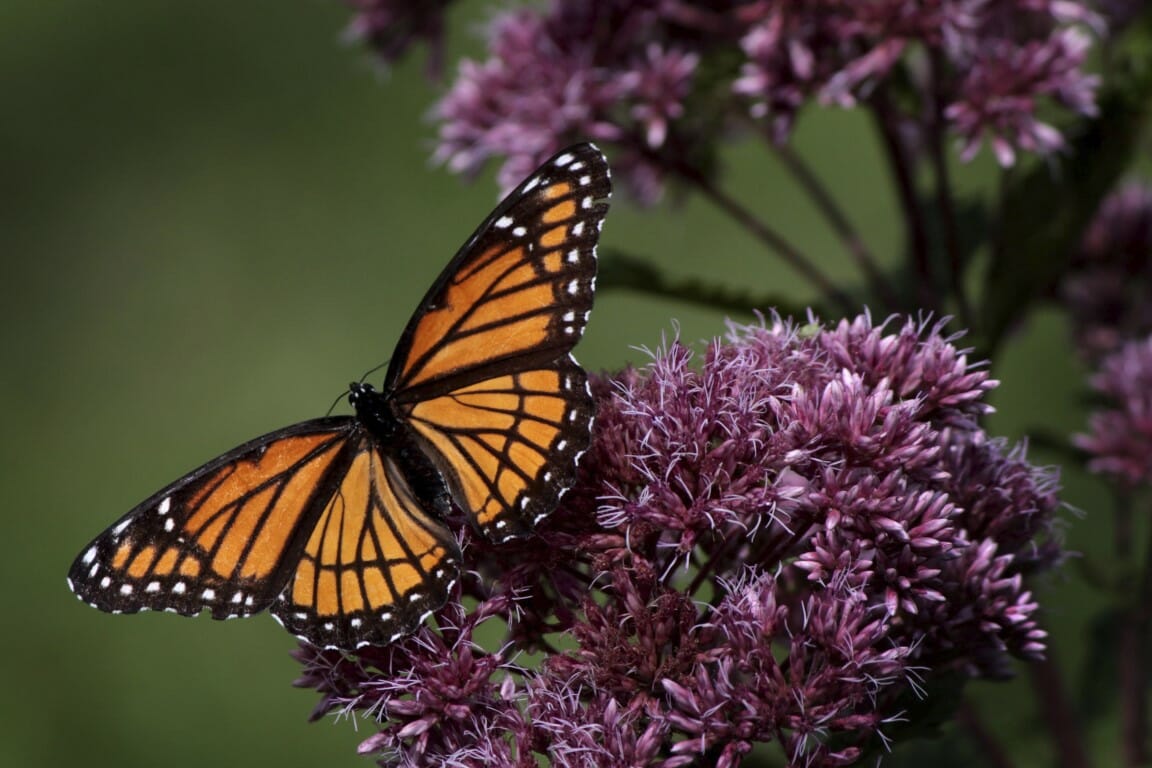 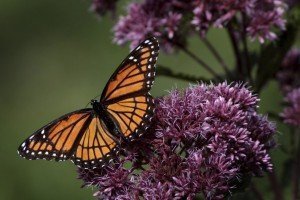 Monarchs—those beautiful orange butterflies we’ve seen all around in late summer in past years—are becoming scarce.  This is due in large part to loss of habitat—both where they overwinter in Mexico and summer in the U.S., as well as some recent temperature extremes.  While we can’t do much about the weather, we can help monarchs by restoring their habitats and food they require to survive and reproduce.

Monarch butterflies overwinter in a unique forest habitat in central Mexico.  Ecotourism, illegal logging, and natural disruptions such as fire or disease threaten this small region where all the monarchs overwinter.  Since record keeping began in 1994, their numbers peaked at an estimated one billion in 1996, compared to an estimated 33 million during the winter of 2013-2014.  During this winter, only 1.65 acres were covered with monarchs, compared to 51.8 acres in 1996.

After winter, monarchs migrate to the southern U.S. states where they breed.  They have 3 to 5 generations per year, each generation only living 2 to 6 weeks, except the last.  The final generation that migrates up to 2,500 miles back to Mexico can live up to 8 months.  It is the successive generations, after the first, that migrate north and that we typically see there in mid to late summer.

Understanding how they feed is a key to how we can help monarchs.  While the adult butterflies are “generalists” and can feed on the nectar of a variety of flowers, the caterpillars (or larvae, that of course latter change into the butterflies after forming a “chrysalis”) are “specialists” feeding only on milkweed. Female butterflies use visual and chemical cues to locate milkweed plants for laying their eggs. They seldom lay eggs on other plants if there are no milkweeds, as the larvae that hatch will die.

Much of the “breeding” ground or habitats of the monarch in this country have been lost.   In populated areas, this has been due to development and loss of the important milkweeds, replaced by either paving or manicured landscapes.  Over half the monarchs that end up migrating back to Mexico have done so historically from the central states or “corn belt.”  Milkweeds have been decimated in these areas from the increased use of weed killers on herbicide-tolerant (GMO) soybeans and corn, and the increased production of these for biofuels.  Couple these factors with a changing climate of extremes, including cold and wet springs and summer droughts, and many fewer have bred and returned to Mexico.

Based on these facts on the monarch butterfly habitats and needs, here are ways you can help these beautiful pollinators.  In your community, encourage local towns, property owners, and farmers to delay mowing areas with milkweeds until fall.  This is especially important in late summer when the migratory generation is developing.

Also encourage local, state, and corporate officials from spraying pesticides and herbicides in monarch habitats (particularly those with milkweeds) along roads, railroads, and powerline right-of-ways.  Especially avoid spraying for insects when monarchs are present.

These same practices apply in home landscapes.  In addition, you can plant butterfly gardens and plants using native milkweeds and nectar plants.  A key is site selection—it should be in full sun (at least 6 hours or more a day), sheltered from wind, and with well-drained soil.  Swamp milkweed is an exception to most butterfly plants, as it will take poor drainage and water-saturated soils.

Perennial flowers that should grow for more than one year include fennel (also a host for the black swallowtail),  Joe pye (Eupatorium purpureum), tall garden phlox (Phlox paniculata), ironweed (Vernonia), sedum,  and purple coneflower (Echinacea purpurea).  When choosing flowers, particularly from groups like the coneflowers which have many selections with double or frilled flowers, try to include species rather than cultivars (cultivated varieties).  Species often contain more nectar and may be more attractive to pollinators like the monarch.

There are many resources to learn more details on these topics, and to help monarchs as well as pollinators in general.  The Xerces Society (www.xerces.org) works to help all pollinators, and offers a book (Attracting Native Pollinators) as well as a pollinator habitat sign for purchase.  Journey North (www.learner.org/jnorth/monarch/), while designed for kids, offers much easy to read information on all aspects of monarchs, and the chance to be involved in “citizen science” with tracking migration.  Perhaps the most extensive resource is Monarch Watch (www.monarchwatch.org).  Begun in 1992, this non-profit organization based at the University of Kansas provides information, products (even milkweeds) and a Monarch Waystation certification program (www.MonarchWatch.org/ws).