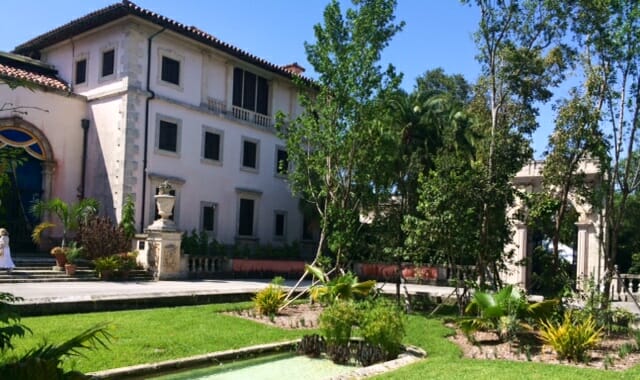 Once A Winter Home: Vizcaya Museums and Gardens

Miami has made a name for itself as being a desirable destination, be it a quick summer vacation or a more permanent residence. People flock to the entire state of Florida for its reputable warm weather, sunshine and sandy beaches, and Miami is definitely a Florida hotspot, especially when it comes to having a warm place to go for the winter. With popular spots like Miami Beach, to the Everglades Alligator Farm, to dining around Miami’s impeccable culinary scene, it’s no wonder this place gets so much love and is one of the best places to retire in Florida. And in 1910, it wasn’t much different.

Vizcaya Museum and Gardens is a special attraction to the Miami area. Created as a winter home for James Deering—International Harvester Vice President—in the 1910s, this incredible mansion is now a National Historic Landmark and accredited museum.

Vizcaya is Miami’s legendary home and an incredible site to explore if you find yourself in the area. The mansion originally sat on 180 acres of land, and was conveniently positioned slightly south of Miami’s historic (and current) downtown business district. Deering chose this area for his winter home because his father already had a home in Coconut Grove, and he loved the area. As visitors of Vizcaya will see, the home is beautiful, modeled after a centuries-old Italian country villa. Surprisingly, though, when it came to the design of his home, Deering hired three relatively inexperienced men to design it. But more than ten years later, those three men had created a beautiful home and it finally opened for occupancy Christmas Day 1916 (when the main house was complete). The design also allowed for the home to take full advantage of its location on the Biscayne Bay. Deering wanted Vizcaya to be approached and seen from the sea.

Though Deering died in 1925, his home was no stranger to well-known figures of the time. He hosted people like film-star Lilian Gash and President Warren Harding, among others. Today, Vizcaya plays host to thousands of people who come to admire the beauty of the mansion and it’s stunning, European-inspired gardens—among the most elaborate in the United States. Thanks to Deerings nieces, who decided to open the home to the public in the 1950s, it quickly soared to the top as a major tourist attraction, and follows suit today. Tours of the home are available every day except Tuesdays, Christmas and Thanksgiving, and your ticket gives you entry to the main house and grounds.