Only Jimmy Buffet Could Inspire a 55+ Lifelong Party Program

You’ll get a lot more than a cheeseburger in this 55+ paradise.

Two “55 and better” Latitude Margaritaville communities have appeared on the east coast map over the past two years. And, One Particular Harbor Margaritaville has landed in Minto’s Harbour Isle in Bradenton, FL, and is expanding…quickly. It’s pretty clear that baby boomers are ready for fun in the sun, and lots of it.

How it all Started

Jimmy Buffet fans have proven to be in it for the long haul. In the 70s, Buffet’s music created not only a following, but a longing for the particular lifestyle that his music preached. And, diehard Buffet-fans are ready to cash in.

Serendipitously, 55+ communities with a laid back, good times approach proved to be a natural fit for the Margaritaville empire that Jimmy Buffet created.

“Latitude Margaritaville seemed like such an obvious idea to us…. What better place to enjoy the ‘back nine’ of life than Margaritaville. We think of Latitude Margaritaville a bit like going back to summer camp — where old friends, new friends,family, numerous activities, state-of-the-art amenities, quality food and beverages, and great music come together. Simply put, it’s fun.”

And, so began the Minto/Margaritaville partnership.

The fortuitous Minto Communities/Margaritaville Holdings, Inc. partnership has created a phenomenon similar to the advent of Del Webb’s Sun City in the 50s. Much like the mile of cars waiting to enter the gates of the active adult dessert oasis that Sun City created, hundreds of couples camped out outside of Daytona’s Latitude Margaritaville Sales Center the night before the grand opening last November.  It was a convincing introduction to life in the Key West-themed community, because, yes, you guessed it. An all night party, complete with music, and dancing ensued. The first phase of development at Latitude

Margaritaville Daytona includes 378 home sites. Over half were reserved within a few days of the sales center opening.

“It was awesome to witness future residents of Latitude Margaritaville create their own community, under a tent, while waiting in
line to pick out their new homes. They shared stories, their dreams of living in Margaritaville, their passion for the Margaritaville lifestyle and bonded over this once-in-a-lifetime experience,” said Tamara Baldanza-Dekker, chief marketing officer of Margaritaville. “Strangers became friends overnight and by the time they entered the sales center, many of them chose to be next door neighbors….” Dekker added.

Such is life for baby booming Parrot Heads. 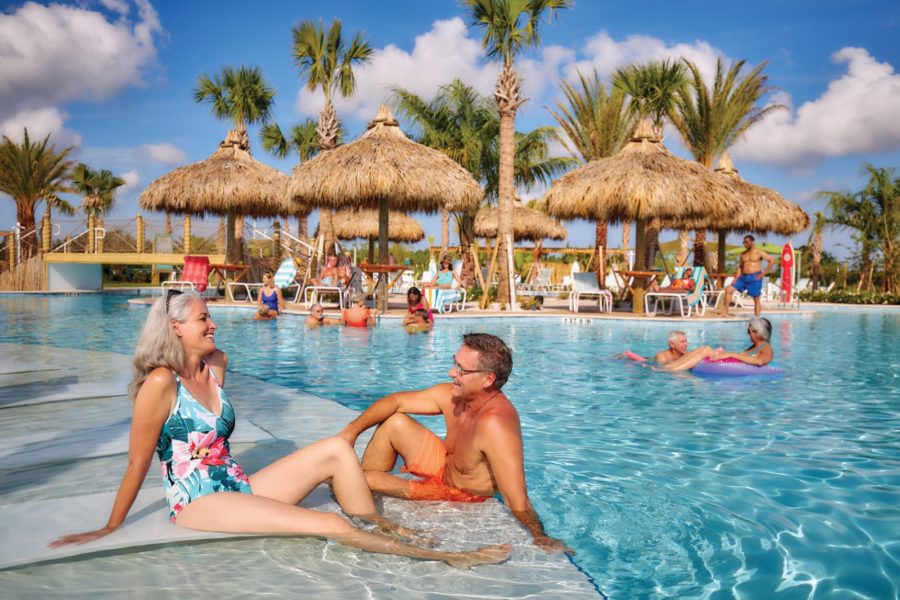 Hilton Head, SC, perhaps only second to Florida as an active adult haven, was primed and ready for a community like Latitude Margaritaville. The sales center opened this winter with similar fanfare. Nine models will be open by summer 2018.

Residents are ready in Daytona. Owners and prospective buyers flooded nine newly opened models in March of this year.

Dining at the Latitude Bar & Chill, dropping your dog off at the Barkitaville Pet Spa, and pulling into your driveway from St. Somewhere Drive is just the icing on the Latitude Margaritaville cake. While even for Buffet, times are a-changing, a few things remain the same. Early-rising might mean earlier naps, but there are always naps. And, early days mean even more time in the hammock, which generally means more margaritas. 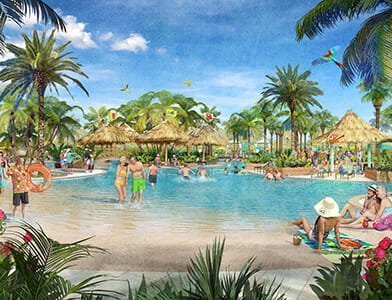 And, even in Margaritaville, 55+ still means staying active, getting involved, and lifelong learning.

Expect to work out at the Fins Up! Fitness Center. Count on working (a little) and taking classes at the Workin’ and Playin’ Center. And, know that there will be dancing at nightly concerts in the Latitude Town Square.

When it’s all said and done, each Latitude community will vary only slightly. And, unrestricted Margaritaville neighborhoods and marinas like One Particular Harbour in Minto’s Harbour Isle will likely continue to pop up near existing resort communities. In fact, the only constant that we can expect from this new Minto/Margaritaville partnership, is growth.

Because, as Jimmy Buffet once said, “Fun is as about as good a habit as there is.” And, good things, when well-fortified, can do nothing but grow.

Click on your location of choice to get more information about the Margaritaville lifestyle: