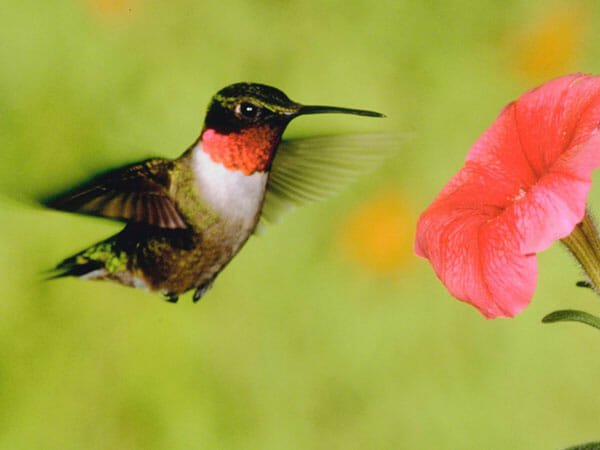 Invasion of the Nectar Snatchers

Invasion of the Nectar Snatchers

Last week the text message I had been waiting for finally came in.  “Gregorio is back!”  It was from my wife, who was telling me that the hummingbirds had made their first appearance.  Gregorio the Green is her pet name for the beautiful Ruby Throated Hummingbirds (A. colubris) that grace our backyard every spring and early summer.  Named for their ruby red throat feathers, they are metallic green above with dusky green flanks, a black head, and a forked tail.  Indeed, Mr. Gregorio is quite the handsome fellow.

Our initial attempt to attract hummingbirds began with a simple hummingbird feeder that we hung in the back yard.  By keeping a fresh solution of sugar water (one part sugar to 4 parts water) in the feeder, Gregorio continued to grace us almost all summer long.  Each summer we would add a few different natural sources of nectar.  Trumpet honeysuckle, red salvia, a butterfly bush, hibiscus, and all kinds of petunias have proven to be good hummingbird restaurants.

Our Gregorio is fiercely territorial and can often be seen chasing other males out of our back yard.  He makes a staccato chattering noise that leaves no room for misunderstanding, “Find your own flowers, these are MINE!”  For such a small fella, he sure has a big “voice”.  We have learned to plant our flowers more than six feet apart, in order to keep one Gregorio from dominating the entire backyard and ensuring that the buffet is shared.

Hummingbirds have always amazed me.  Smallest of the birds native to North Carolina (where I live), the Ruby Throated species summers over a wide range that stretches from Canada to the Gulf Coast, and from the Atlantic to the Midwest.  By the time they have reached us, they have already flown almost 1000 miles, 500 of those over the Gulf of Mexico without being able to stop for a rest!

Perhaps the most astonishing part of Gregorio’s behavior is the way he flies.  He can hover right in front of a flower as he feeds, change the direction of his flight almost instantaneously upon approach or departure, and do it all so fast one has to wonder if he was even there or not.  The humming sound of his wings beating a bewildering 53 times per second is enough to confirm it was really him though.

By early August, the nectar in our feeder will suddenly stop being consumed.  This is the signal that Gregorio has started the long trip back to Central America where he and his family go for the winter.  It is always a bittersweet moment when we realize this.  But we know we can count on him to return the next year, and for us to share our delight with the text, “Gregorio is back!”