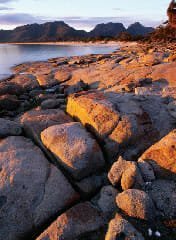 It was 1982, and my young son Kurt and I were working at the Australia Outward Bound School in Tharwa when we heard that Reinhold Messner, the first man to ascend Everest without oxygen, was to give a talk at the University of Tasmania. Armchair Everest groupies, we went to hear him.

All we had heard about Tasmania from our Australian friends was that it was a bit backward but had huge scallops, the best apples in the world and fields of poppies. Right before our plane landed in Hobart, the stewardess advised us that Tasmania was in a different time zone and that we should set our watches back 20 years.

Tasmania drew us in and won us over. I’ve been back eight times so far, and Kurt and his family have settled in the hills outside Hobart. One of the world’s most diverse and picturesque islands, Tasmania is tucked away beneath mainland Australia.

More like New Zealand in climate and terrain than the Australian mainland, Tasmania has rainforests and mountains, isolated beaches, wild rivers and wilder animals. Some, such as the endangered Tasmanian Devil, are found nowhere else in the world, and over 30 percent of the island is protected as a World Heritage Area, national park or forest and marine reserves.

I’ve only begun to explore the wilderness areas. It’s a perfect place to roam by car, with so little traffic on the main roads (you could hardly call them highways) that you can drive for miles without ever seeing another vehicle.

The frequent flights from Melbourne, Sydney or Adelaide to Hobart or Launceston are little more than an hour across the Bass Strait, and there is also an overnight ferry from Melbourne.

Tasmania’s summer months are December to February, bringing warmer temperatures and sunshine to the whole of the country. Days are long and nights are mild. The stars are clear and bright, and Tasmania’s air quality has been lauded as the world’s cleanest.

Spring brings lush green, moderate temperatures and flowers tumbling all over each other. Summer Down Under is a good time for bushwalking, rafting, fishing, biking, cruising, sightseeing, exploring history… you can try it all. Or don your bathers, grab your sunnies, and head for the serenity of the beach. The sun is brutal in the Southern Hemisphere, so slather on the sunscreen and wear a hat. Summer also brings some rain, and a light jacket would be useful. Very cold in winter, Tasmania can also be cold in summer, especially on the coast or at high altitude. It’s never warm on windy Mt. Wellington, but the views make it worth braving the cold.

The last few years have seen a proliferation of luxury hotels and guesthouses blending Tasmanian timber and stone with classic, modern furnishings. In Launceston the TwoFourTwo has three luxury apartments decorated by one of Tasmania’s top furniture designers. The reception showroom has locally made products from jewelry to furniture.

From Launceston it’s not far to the Freycinet Peninsula and Wineglass Bay. We stayed in one of the large basic-but-expensive cabins at the Freycinet Lodge, where we had lunch on the verandah overlooking the empty beach. My son and daughter-in-law took off immediately with their toddler in a backpack to hike through Freycinet National Park where from a wooden ledge you view a spectacular endless pool of clear blue water.

An unusual stay awaited us at Diamond Island Resort, with its panoramic water views. For a different kind of water view, the penthouse suite has a glass wall between the living room and the bathroom shower-not for the shy. For modest folks, there are other rooms with solid bathroom walls.

Diamond Island is home to a penguin rookery, and at night you can spot the little Fairy Penguins (yes, that is really their name) coming in from the ocean to their burrows. Contrary to popular belief, these penguins are not monogamous, and our group was entertained by a wayward female returning to her mate and hiding her face in what certainly seemed to be shame.

Described as an idiosyncratic luxury, Hobart’s harborside Henry Jones Art Hotel has won many major awards since reopening in 2004, including the Australian Hotel Association’s Award for Excellence and Best Overall Hotel in Australia. Transformed from a row of historic warehouses and a jam factory, Henry Jones is a museum with its original staircase, restored machinery and a magnificent atrium. The rooms have stayed true to the restoration, and are different in shape and size. The hotel is filled with original art from Tasmanian artists, some of which can be purchased. The art changes regularly, and on Friday evenings at 5:30 pm there is a free tour of the hotel and its art.

If I’m in Hobart on a Saturday, I make time to explore the crafts, culture, and cuisine at Salamanca Market with my two-year-old grandson, Achille, a Tasmanian native. The Tassie look seems to be to layer as many colors, patterns and styles as possible, making the shoppers as interesting as the shops.

Salamanca is Australia’s most varied market, bringing people from around the world to shop and the native Tasmanians to socialize and buy every Saturday, rain, shine or snow, all year round.

Challenging Scotland’s links courses, Barnbougle Dunes, near Bridport in the north of the state, opened less than three years ago and is an invigorating and usually windy links course which has made brilliant use of the dunes and the spectacular site between sea and land.

Getting really close to nature at ZooDoo, a wildlife park near Richmond not far from Hobart, we traveled in an open bus to feed the emus, which to my horror were eating off my back and neck where the driver had tossed the emu feed. Achille sat bravely through the assault of the emus, the ostriches, the camels and the water buffalo.

In the countryside outside Richmond we discovered Hatcher’s, where we spent one of our best nights. The host built all the furniture and the buildings to look as if they were Old English, but with wonderful spa baths. Our room was easily three times as big as any other we had, including the five-stars.

Tasmania, about the size of Virginia with only two million people, beckons those who dream of new adventures. Cradle Mountain’s moorlands and glacial lakes, long walks and Enchanted Woods, cruises from Strahan, the small towns and villages, the open roads… heaven!

The world is discovering Tasmania, one of Australia’s last frontiers. Who wouldn’t want to go back 20 years, to unspoiled wilderness and friendly natives? Count me in.

Betty Austin-Ware, a Premier Aussie Specialist with the Australian Tourist Commission and a New Zealand Kiwi Specialist, is owner of Waltzing Matilda Travel Consultancy and has made over 30 trips Down Under. She can be reached at baware96@comporium.net or toll-free at 866-847-9835.