Grow Your Own Cucumbers 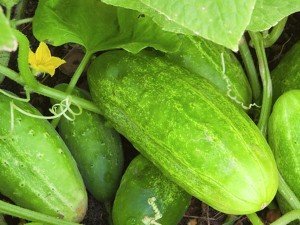 Most know cucumbers from their use in salads, eaten fresh, or pickled. They are among the top five vegetables nationwide, and in recent Vermont surveys they ranked the fifth most grown vegetable. You'll find dozens of selections in stores and seed catalogs. Cucumbers are easy to grow from seeds, and there are selections for slicing or pickling, for garden beds or patio pots and trellises.

Cucumbers are in the same "cucurbit" family as squashes, pumpkins, and melons. They all are trailing vines with rough, hairy leaves, and yellow flowers. Cucumbers of the past grew as long vines, and many still do, but some newer selections are "bush" types. These grow in mounds, making them good for small space gardens and large containers. 'Spacemaster' is a good choice for containers.

Most cucumbers are slicing types, dark green with prickly skin when young, some still with spines when mature, white flesh, and in addition to the usual cylindrical can be oblong or globular. These "American" types are for eating fresh, with fruit from 4 to 10 inches. Two of the most popular in the north are 'Sweet Success' and 'Marketmore'.

Asian or oriental cucumbers are those that are quite long-a foot or more, sweet and mild, and with a thin skin. You'll want to grow these on a trellis for long and straight fruits hanging down. 'Armenian' is a long, curved selection that comes in either light green, or with light stripes. This novelty is actually an elongated cantaloupe that is best eaten fresh when immature, or cooked like a summer squash. Leave it on the vine and it can reach 3 feet long!

If you tend to have a social, if not digestive, problem after eating cucumbers, then look for the "burpless" selections, either American or Asian types. They produce little to none of the "cucurbitacin" compound that is responsible for bitterness, as well as susceptibility to burping. Other cucumbers can become more bitter with stresses, such as heat and drought. Much bitterness can be eliminated by peeling the skin, and cutting off an inch of fruit close to the stem.

Tired of the usual or want something different? Then try the rounded, pale yellow-colored "Lemon", 'Gold Standard' with golden flesh, or the heirloom (from 1893) white-skinned "White Wonder". For a different pickling cucumber, consider the white-skinned 'Salt and Pepper'.

Another means to help choose among the many available, is to look for All-America Selections (AAS) winners. Vegetables and flowers with this designation have been judged among the best when they were introduced. There are nine such cucumber winners since the program began in 1933.

Among the more recent AAS winners is 'Sweet Success' (a winner in 1983), burpless, with thin skin that doesn't need peeling. 'Salad Bush' (1988) is a good size for containers and raised beds. Good slicing winners include 'Fanfare' (1984) and 'Diva' (2002), the latter being non-bitter and spineless. 'Saladmore Bush' (2014) can be picked young for pickling, or older for slicing, and has a semi-bush habit. 'Pick a Bushel' (2014) has a bush habit so is good for patio containers, can be harvested young for pickles or older for slicing, and bearing early is good for the shorter season in the north.

To grow best, cucumbers like full sun, and a well-drained soil that is fertile, with plenty of compost. You can sow directly outdoors when the soil has warmed at least above 60 degrees (F), and all danger of frost is past. Cucumbers grow best with air temperatures above 70 degrees day, and above 60 degrees at night.

To get a jump on the short northern season, sow seeds indoors 2 to 4 weeks prior to planting out. Use a soilless potting mix, and peat pots or similar containers. "Harden" seedlings off before planting out, both to outdoor temperatures as well as increased light levels. If you take them directly from low light to full sun outdoors, leaves will surely "bleach" out and become damaged.

Once planted, give plenty of water with deep watering. Plants need lots of fertilizer to grow well, so use one especially for vegetables, according to label rates.

When plants start to grow, mulch around them with several inches of straw or similar weed-free organic material, plastic, or synthetic weed fabric, to help with weeds and conserving soil moisture. If nights get cool, you may want to cover the young plants for a few weeks with a "floating row cover"-a lightweight fabric you can find in complete garden stores, or even a hotcap or "cloche". Just make sure to remove these before flowering for proper pollination.

These floating row covers also provide protection against a couple of key insect pests-- cucumber beetles and squash vine borers. The latter comes from eggs laid in stems in late June from orange moths with black spots. The borer larvae that hatch chew in stems, causing them to wilt and die. If your vines do get infested, and you see holes at the base, just poke a wire in the holes to kill the larvae. Cucumbers can get several diseases, too, but choosing disease-resistant varieties and providing good air circulation will help prevent these.

If you're short on space, consider growing cucumbers upright on a trellis, lattice, or A-frame structure. Structures should be at least 6-feet high, and well-anchored to the ground. Help the young vines find the string or netting, and tie them to these as needed. If growing in a large container (make sure it has drainage holes) such as wooden tub or whiskey barrel half, use a soilless mix or one amended with an equal part compost. These will dry out more often and need more water than plants in ground beds. Keep plants fertilized. You might try interplanting some trailing plants as nasturtiums or petunias in these containers for color.

The key to the highest yields, in addition to proper culture, is to pick regularly. Mature fruits, left on the vine, signal the plant to stop producing. Generally, pick slicing types when they are 6 to 8 inches long, the larger ones before they are 10 inches long. Harvest pickling types when they are one to 4 inches long, the shorter ones referred to as "gherkins". In addition to length, mature fruit will be firm and of uniform color. Cut them off, rather than twisting, to avoid damage to the vine. Refrigerate soon after harvest.

Each year the National Garden Bureau chooses a Vegetable of the Year, the one for 2014 being the cucumber. Visit their website to learn more about this, as well as other popular vegetables and flowers (www.ngb.org/).